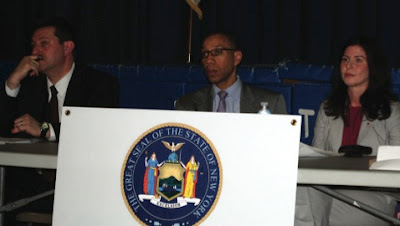 With the state law granting the mayor full control over city schools set to expire, the debate over the system is underway in Albany and in town hall meetings, including one hosted by Senator Joseph Addabbo last week in Middle Village.

A 2002 vote by the state legislature established the school governance system known as mayoral control, which allowed Mayor Bloomberg to abolish the local board of educations and hire a chancellor to run the public school system. However, due to a sunset provision, the law expires on June 30 unless lawmakers renew it.

“This is an opportunity to make this process a better process,” said Senator Addabbo (D-Howard Beach) at last Wednesday’s town hall session, which was also attended by Deputy Mayor Dennis Walcott, who oversees the city’s Education Department for the Bloomberg Administration. “The legislature shouldn’t vote without input” from residents and other stakeholders, added Addabbo.

Walcott called himself a “firm believer in mayoral control” and said there have been “significant improvements in the system” since it was established seven years ago. He cited areas such as test scores and the number of seats created through new construction as examples of progress made since Mayor Bloomberg was granted full authority. “The bottom line for me is accountability, transparency and parental involvement.”

However, many of the parents, teachers and officials who spoke later in the meeting argued that mayoral control has stifled their voices, making it hard to seek out answers from administrators and has left local superintendents with little power.

Jo Ann Berger, who has three children in PS 153 in Maspeth, said parents have been relegated to “leaving voicemails and never getting a call back” when they seek information from administrators. “There is little to no response to parents… There is no place a parent can to go” due to the elimination of local offices, she added.

Berger also took issue with the Bloomberg Administration use of test scores to gauge progress, especially since students spend three months prepping for the exams. “That’s what you are basing our performance on? I don’t think that’s fair,” she said.

Another bone of contention for many is the Panel for Educational Policy (PEP), which was formed along with Community Education Councils after the Boards of Education were abolished. Under the old system, the mayor appointed two of the seven Board of Education members, while he appoints eight of the 13 PEP members.

That has led critics to argue that the members don’t hold real power – especially after three members appointed by Mayor Bloomberg were fired in 2004 for questioning a Department of Education plan. At last week’s hearing, Dermot Smyth, a teacher at IS 5 in Elmhurst, said that the teacher’s union supports mayoral control, despite several “little flaws we’re looking to address.” He argued that the panel needs “independent voices who can work collaboratively with the chancellor” instead of political appointees.

Ozone Park resident and blogger David Quintana agreed that the mayor’s appointment of eight of the 13 PEP members means “he has a slam dunk on anything he does.” He called the local school boards “the most basic form of democracy we have.” Instead, they have been replaced with “powerless” local Community Education Councils. “Parental involvement has gone down the drain under this administration.” To prevent the PEP from being controlled by the mayor, the teacher’s union has suggested that the city comptroller, the public advocate and City Council speaker each appoint a member, leaving the mayor with five appointees.

Marge Kolb, president of the District 24 PTA Presidents’ Council, said there “needs to be a lot of adjusting” to the current system. She agreed that PEPs “should not be controlled by the mayor” and argued that some members should have educational credentials. “I don’t know where the mayor came up with the curriculum he purchased, but it wasn’t in consultation with educational professionals,” she said.

Former Assemblyman Michael Cohen, who was in office for the initial vote granting mayoral control in 2002 said he was “very uneasy voting for this bill [because] it is giving the mayor absolute control over the system.” Instead, he agreed that the city needs “accredited educational professionals to make educational policy.”

Community Board 6 District Manager Frank Gulluscio said his office has received numerous complaints from parents who feel the current system has stifled their opinions. “We want to be heard. We don’t just want lip service,” he said echoing the complaints his office has heard regarding mayoral control.

The harshest criticism of the evening towards the Bloomberg Administration’s governance of the school system came from Juniper Park Civic Association President Robert Holden, who accused officials of lying to the public.

“At one time I was for mayoral control. Then I saw the mayor in action. Then I saw Deputy Mayor Walcott in action. They just do as they please,” he said before criticizing the city’s decision to build a high school in Maspeth despite strong community opposition. “You just completely lie. You don’t tell the truth, you hide things,” he said to Walcott. “We have a dictator who says you will have this whether it’s good or not.”

Councilwoman Elizabeth Crowley (D-Middle Village) said that city officials “really don’t have much oversight on how [the $22 billion budgeted for education] is spent.” She also argued that the current system “doesn’t give fair representation” to community members. She also hears “a lot of complaints” about students being “taught for tests.”

“I do believe for the most part that the quality of education has improved over the years,” said Crowley. However, she added that much of the gains are because elected officials have made education “a top priority” for funding.