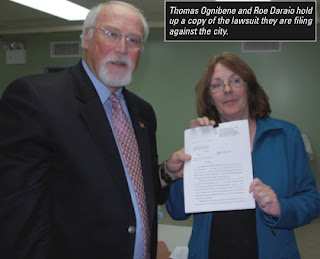 Middle Village attorney Thomas Ognibene has joined up with two local civic groups to file a lawsuit against the School Construction Authority to prevent the city from immediately moving forward with its Maspeth high school project.

Thomas Ognibene, who is running for City Council in November, announced on Monday that he has joined up with civic groups Communities of Maspeth and Elmhurst Together and the Juniper Park Civic Association to file the lawsuit. The civic group’s participation was necessary, he said, in order to give the lawsuit standing – something he expects the SCA to challenge instead of addressing the “substantive issues.”

“The primary goal is to ensure that kids don’t wind up going to school in a highly-toxic environment,” said Ognibene of the lawsuit’s intent. “Unfortunately, the City Council should have stopped this – that’s why we have a City Council.” He accused the DOE of providing the City Council with a “false and misleading report” and said the public was left with no alternative other than filing the lawsuit.

The City Council voted 38 to 10 in April to approve the Department of Education’s plan for a 1,100 seat high school on the former Restaurant Depot site at 74th Street and 57th Avenue. The vote came despite overwhelming opposition from Councilwoman Elizabeth Crowley (D-Middle Village), who voted against the plan, and local residents. The civic groups charge that it wasn’t until after that vote that the full extent of the site’s contamination was revealed to the public. Last month the city paid $16,250,000 for the site, which was recently listed for $15 million.

Ognibene called the DOE’s plan “a perfect issue for the City Council to have done a more thorough job” and said he would have would have demanded “at least a phase three” environmental impact statement. “I would have gone to my colleagues and been more forceful in ensuring the kids are protected,” he said. “Unfortunately, I’m not the councilmember and have to rely on going to the courts.”

Robert Holden, president of the JPCA, said that the SCA is acting “as a private company that is not accountable” to the public. “Mayor Bloomberg needs to understand that mayoral control of schools doesn't mean he has the authority to cut corners, ignore public input and endanger the lives of our children,” he wrote in an e-mail. “Hopefully this lawsuit will demonstrate… that our community will fight and not just rollover and be forced to take projects that are detrimental to the well-being of our neighborhood.

Last month, Ognibene (R-Middle Village) announced he would challenge Crowley this November to represent the 30th district, a seat he held from 1992 until 2001, when he was forced out of office due to term limits. Crowley spoke briefly at Monday’s COMET meeting and had left before Ognibene arrived to announce the lawsuit. On Tuesday, Crowley’s press secretary said the councilwoman doesn’t have a comment on the lawsuit.

During her remarks on Monday, Crowley said that the DOE had been working on the Maspeth school proposal for nearly two years before she took office. “It was Mayor Michael Bloomberg, Deputy Mayor Dennis Walcott, Chancellor Joel Klein and the SCA that really felt they could do as they saw fit,” she said. “As frustrating as it was dealing with the DOE, at least we got some concessions… We’re lucky the school isn’t twice the size it was proposed to be and not for the entire city.”

Through her negotiations with the city, Crowley was able to get the DOE to agree to zone the school so that students in District 24, which stretches from Long Island City east to Corona and south to Ridgewood, first priority. Students from the adjacent districts would then get priority, followed by students from throughout the borough.

The lawsuit will seek to force the city to complete a more thorough environmental review, according to Ognibene. A judge would then determine whether the site is appropriate for a school and if additional remediation is needed. He noted that there are 19 city schools that required additional cleanup after they were constructed, which he said costs ten times more than it does to remediate fully after the fact.

“We don’t want that. We want a thorough vetting of the property and a thorough environmental search,” said Ognibene. “The EIS they did was a cursory one that is not sufficient to protect the children… They never should have been allowed to get away with it.”

At the meeting, COMET member Michael Fordunski of Maspeth spoke out against the idea of filing a lawsuit, which he called a “total waste of time” and tax dollars. “There’s no perfect location for a school… We need a high school in this area,” he said, adding that he believes the site will be satisfactorily cleaned up by the time the building opens.

In response, Ognibene argued that you can’t “put a price on the safety of a child” and that “doing it right the first time saves money… Nobody wants to send kids to a high school with high levels of toxicity.” He said that the lawsuit seeks a preliminary stop order to prevent the city from moving ahead with work at that site. It would then be up to the judge to determine if any further course of action is needed.

A DOE spokesman said he is unable to comment on pending litigation. However, last month the DOE accused “some community members who strongly oppose” the project of “purposefully exaggerating the soil’s toxicity in order to stoke public fears and derail the project.” The department added that “Parents in Maspeth and District 24 should know that the Maspeth High School will be completely safe for students and staff.”
Posted by The Forum Newsgroup at 1:55 PM

Crowley is clueless, we need Tom Ognibenie in office. I'll help work on handing out his leaflets. I'll do anything to get rid of that Crowley woman. She's a disaster.