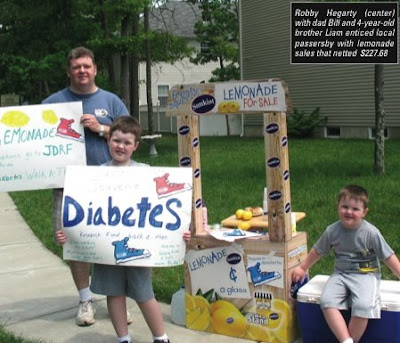 Turns Entrepreneur For A Great Cause

The 1st Annual South Queens Walk to benefit Juvenile Diabetes saw thousands of walkers take to the street on Saturday raising more than $100,000 toward research. But one very enterprising young Howard Beach man raked in a sizeable amount of cash on his own to benefit the Juvenile Diabetes Research Foundation (JDRF).

Cub Scout Robby Hegarty, a 3rd grade student at OLG and a Bear Cub Scout from Pack 139 put together his own lemonade stand to raise money for JDRF. At the end of the day, Robert had raised over $200–– with very little help from his parents. But the whole family was in on saying how impressed they were with the outpouring of support for Robby’s efforts.

Proud mom Annmarie Hegarty says two teenage girls walked up and gave her son whatever money they had, and commended Robby on his efforts. Less than an hour later, the same girls came back in a car driven by one of their moms. This time they brought along a bunch of their friends, all of who donated to the cause.

“One of girl's friend is currently in the hospital, having just been diagnosed,” Anne Marie explained, “and it meant a lot to help in any way they could.”

Still another man drove past, made a U-turn, and handed over $20––he had lost a sister to Juvenile Diabetes, and hoped he could help other families who are going through what his family did.

After a long day in the hot sun, Robby Hegarty had raised $227.68. But even more valuable were some of the lessons learned--that one person can make a difference, no matter how young they are, and that the people in his community always pitch in to help.

“We are so proud of him,” said Annmarie Hegarty. Robby is very compassionate child, and this cause has close and personal ties for him. It’s great he had the chance to do this.” Two of Robby’s cousins, Trisha and Mike and an uncle all have the disease. Robby also lost two uncles to juvenile diabetes––he never met either of them.

The Hegartys say they are thrilled that the walk was a great success, and are all looking forward to participating again next year.
Posted by The Forum Newsgroup at 1:53 PM