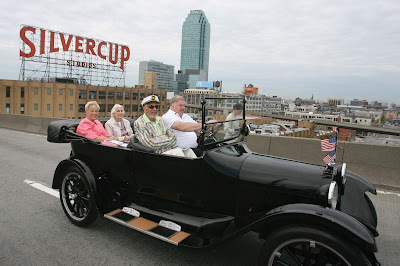 Among revelers at the 100th birthday bash for the Queensboro Bridge on Sunday, was Queens Borough President Helen Marshall, who crossed over the structure in a 1919 Dodge to mark the birthday of the East River’s longest span, already immortalized in book and song. A Grucci fireworks show Sunday evening on the southern tip of Roosevelt Island brought the celebration to a brilliant close.

A week of festivities that includes exhibits, lectures, walking will continue through this weekend. (A complete list of events can be found by going to www.nycbridges100.org.

Joing the Queens borough president were Ms. Francesca Lindenthal Gebhardt, daughter of the bridge’s engineer, Gustav Lindenthal, and her grandson, Allen Renz. Their 8 a.m. crossing commemorated the official opening of the cantilevered bridge on June 12, 1909. Despite years needed to complete construction of the 7,449-foot crossing, the total cost was approximately $17 million.

The trip across the bridge was marked with a midway point meeting of Helen marshal and Manhattan Borough President Scott Stringer. There were remarks about the history and modern-day role of the bridge followed by a red, white and blue water salute from the FDNY Fireboat Kevin Kane.

“This bridge not only helped to transform our agrarian economy into a modern metropolis,”” said Marshall, “but also has aged well and looks as good today as it did a century ago – and it continues to make people feel ‘groovy.’ ”

The bridge is also credited with starting a home building boom that brought the first apartment building to Astoria and doubled the community’s population in just a few years. Today, the East River crossing is traversed daily by more than 183,000 vehicles, 800 bicycles and numerous pedestrians.

In his book, ”Queens A Pictorial History,” historian Vincent Seyfreid notes that the Queensboro Bridge “was the first (bridge) to end the isolation of Queens by connecting Long Island City with 59th Street, Manhattan.

It was F. Scott Fitzgerald who helped to immortalize the bridge in “The Great Gatsby,” and singers/songwriters Simon and Garfunkel who sang about in the “59th Street Bridge” song in a 1966 album that looked at the fun in “feelin’ groovy.” Marshall noted that, “Even though we love the song, the plaque on the bridge says Queensboro Bridge.” The bridge has also made appearances in movies including “Annie Hall” and “Spiderman.”

Marshall thanked the members of the NYC Bridge Centennial Commission for organizing Sunday’s event and especially Sam Schwartz for his “dedicated efforts to bring us together today in recognition of this historic event.”

The NYC Bridge Centennial Commission, Celebrating a Century of Great Bridges, is working in partnership with the Office of the Mayor, the Offices of the Borough Presidents of Queens, Manhattan and Brooklyn, the City Departments of Transportation and Parks and Recreation and the Landmarks Preservation Commission.