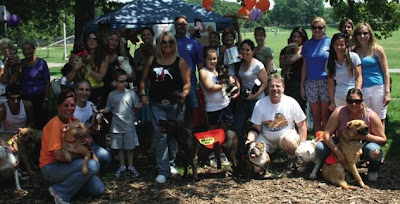 Four Paws Sake Rescue, together with the Mayors Alliance for NYC Animals, held its 1st Annual Adoption Event at Juniper Valley Park on Sunday morning. Hundreds of excited visitors spent time with the more than 60 dogs and cats available for adoption. Representatives and volunteers from a host of animal organizations were on hand to answer questions and offer access to resources for concerned animal owners and activists.

The host organization, Four Paws Sake, Inc. was established in March of this year as a non-profit 501(c) (3) rescue organization. Its founder, Phyllis Taiano, put Four Paws together because of her dedication to ending pet overpopulation. The organization has adopted a mission statement which describes their cause as rescuing animals from kill facilities, provide sanctuary and ultimately to re-home abandoned, stray and neglected dogs and cats. 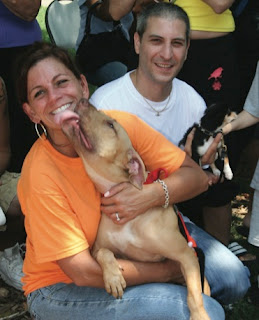 Additionally, the organization seeks to generate awareness in the community about the prevention of animal abuse and neglect as well as spay/neuter programs and their important effect on the dog and cat overpopulation crisis in the city. Once a rescued animal is safely within the care of Four Paws, the dog or cat is treated by one of the organization’s veterinarians. Animals are vaccinated and spayed/neutered. Four Paws fosters all of their rescues until they are adopted. All applicants are screened thoroughly including onsite home visits.

“We are in constant communication with all of our new owners to help provide counseling or to reclaim the pet should compatibility or other issues arise,” says Taiano. “Our goal is to find a permanent home for all our dogs and cats that are in need of a loving family of their own.”

“Most animals the organization rescues have lives filled with neglect and abuse. Our promise is to those animals,” explains Taiano, “that their pain and suffering is over and for the rest of their lives they will have love and security.”

During Sunday’s event several adoptions were arranged, including Rosey from Four Paws. Rosey was pulled from a kill shelter in Manhattan on June 12, weighing only 22.4 lbs, having a broken tail, bitten ears and many sores on her body. She had to undergo surgery but made a great recovery and was rated to have behavior that was of “no concern.”

Rosey was nursed back to health by Phyllis and her boyfriend Steve and on Sunday was supporting a healthy weight and a shiny coat. Rosey looked so good she was snapped up by her new adoptive parents Middle Village residents John and Elsa Meyers. Taiano said the couple live three blocks away from her and each time she walked Rosey past their house the dog would stick her nose in between the steel slats enclosing their little flower patch and sniff a small cement statue of a rabbit. “It’s really ironic that the house Rosey loved so much is going to be her new home,” Taiano said beaming. “It’s moments like this and events like this adoption that make this work so rewarding and wonderful - for all of us and of course for the animals.”

If you would like to learn more about animal adoption and rescue through Four Paws, you visit them at their website at fourpawssakenyc.com
Posted by The Forum Newsgroup at 1:40 PM