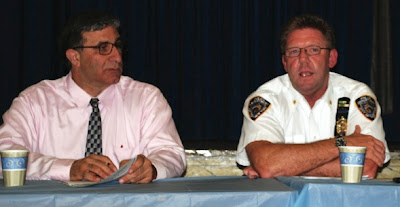 Problems at Cleveland Park that are preventing residents from enjoying the green space were the focus of this month’s Citizens for a Better Ridgewood (CBR) meeting. Other issues included a burglary pattern and the ongoing battle against prostitution along Starr Street, which the community has been dealing with for decades.

Through the first 30 weeks of the year, major crime is down 7.5 percent throughout the precinct, according to Deputy Inspector Keith Green. All of the seven major categories are down with the exception of burglaries, which are up in part due to several patterns in the Ridgewood area, including one open one. Otherwise, murder, rape, robbery, felony assaults, grand larceny and auto theft have all declined compared to the same time last year. In addition, arrests are up 20 percent for all crimes and 16 percent for major crimes.

The precinct was able to put a dent in the burglary numbers with the arrest of two individuals in May police say were responsible for a rash of residential break-ins in the area of Otto and Central avenues. However, there currently is an “open pattern” of burglaries in the southern section of Ridgewood, with at least seven apartments broken into recently. Deputy Inspector Green said the incidents occurred during the day, with the perp gaining entry through windows and some front doors.

“Burglaries tend to go that way, up and down with clusters,” he said. “We’ve made some good arrests recently, but we’re still working on that.” He urged residents to make sure windows are locked and noted that the suspects look for an easy target. “They find the easiest point of entry, so we try to stress [to residents] to make it harder. Even though it’s summer, you need to make your house secure.”

The suspects mostly took money, jewelry and small electronics during the break-ins, which included homes along Forest Avenue and near Fresh Pond Road.

The ongoing problems at bars throughout the precinct, including loud noise and unruly patrons, were also discussed. Steps have been taken to address community concerns at Hush Café on Grand Avenue and at Moonlight Bar and Grill on Flushing Avenue after the 104th Precinct and elected officials received complaints about both establishments.

Deputy Inspector Green said the precinct constantly monitors the local nightlife scene for problem locations so they can take care of issues before they escalate. “Places we see that are going in the wrong direction… we bring them in and have meetings with the owners,” he said, adding that summonses were issue to the owners of both Hush and Moonlight. “As long as we have complaints we’ll be there, and they know it,” he added.

A main source of frustration for many of the residents at the meeting is problems at Grover Cleveland Park, particularly with food vendors. Residents reported that the sidewalks around the park become unusable when the vendors set up shop, double-parked cares are causing unsafe crossing conditions and that illegal gambling is taking place inside the park.

Residents also described “unhealthy conditions” regarding the food preparation, with large open barrels of boiling oil creating a potential hazard. To add insult to injury, the park is left strewn with trash after events are held there, even though cleaning up is part of the requirements for obtaining event permits from the city. A resident said the situation has led to rodents and insects in nearby homes.

“If a police officer comes on one weekend, they will fill their quota for tickets,” said one resident. Added another: “We as residents on weekends don’t feel like we have any rights to go across the street to the park. This is not the first time we’re raising this issue.”

Deputy Inspector Green said officers will look into the complaints regarding the vendors and will conduct traffic enforcement in the area.

“We don’t have to tolerate anything that wouldn’t happen on Mayor Bloomberg’s block,” said Michael Hetzer, vice president of the CBR. “There are at least six, seven, eight different things going on that have to be dealt with by different agencies.”

Civic President Ann Maggio reported that prostitution in the area is once again “in full effect,” especially in the area of Starr Street. “This has been going on for twenty years. I know it’s the oldest profession and we’re not going to get rid of it, but not on Starr Street… If we were in Middle Village, it would be gone.”

Deputy Inspector Green said that prostitution is one of the tougher crimes to make arrests for but that officers are working on the situation. “You can drive by ten times during the night and not see them… It takes a bit of work to make an arrest.”

Hetzer again suggested that the problem is continuing despite years of complaints because of where it is taking place. “We just feel it’s not talked about that much because it’s in our corner” of the precinct.

The civic organization doesn’t meet again until September 28th at 7:30 p.m. in the basement of St. Aloysius Church, 382 Onderdonk Avenue.
Posted by The Forum Newsgroup at 1:30 PM