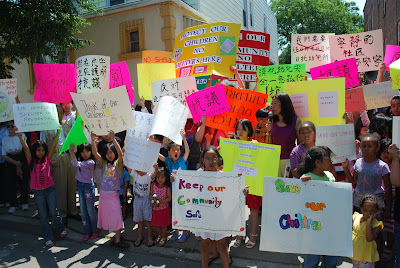 Plans for a homeless shelter in Elmhurst have been halted after the city terminated its agreement with the organization seeking to run the facility out of a 58th Avenue building, but residents’ relief might be short lived, as the future of the property is still unclear.

The city Human Resource Administration cancelled its Memorandum of Understanding with Queens Alliance “to protect the confidentiality of our clients,” according to department spokeswoman Barbara Brancaccio. Queens Alliance had planned to open a homeless shelter for 29 individuals at 86-18 58th Avenue, despite huge uproar from neighbors who say that type of facility isn’t appropriate for the residential block.

While Brancaccio refused to say how the Queens Alliance breached their potential client’s confidentiality, literature distributed by the organization to the public stated that while the location wouldn’t serve as an HIV/AIDS treatment center, “only HIV/AIDS positive individuals who are asymptomatic may be referred to this facility.”

Brancaccio said the termination of the Memorandum of Understanding ends the city’s involvement in the 58th Avenue location for now. However, Queens Alliance – which has no track record running these types of facilities – is free to submit another application to the city to open a shelter on 58th Avenue, where they have a 10 year lease with the building owner.

Residents, who held a large rally in front of the building several weeks ago, said they are glad that the agreement with Queens Alliance has been terminated, but are still concerned over the future of the building. “That’s one of our biggest issues right now,” said Roe Daraio, president of Communities of Maspeth and Elmhurst Together, which helped organized the protest. “I told them [nearby residents] to celebrate the victory, we won the battle but we haven’t won the war. Until they come up with a permanent solution for this, the war won’t be won.”

Daraio said residents are submitting a petition to the HRA and the mayor’s office in hopes the city will help broker an acceptable compromise with the building owner over its future use. She noted that the block already has one group home, which the residents have not complained about. “I commend them for never complaining about the place across the street, even though it has caused some problems, but two would break the camel’s back.”

Representatives for Councilwoman Melinda Katz, who represents the area, did not return a phone call seeking comment on the situation, nor did Richard Italiano, district manager of Community Board 4.

Yolanda Martin-Garibaldi, vice-president of Queens Alliance, didn’t return an e-mail message, and the phone at the 58th Avenue building, which is listed on literature as the organization’s address, was not answered.

Resident Linda Lam, who also helped organize the residents, said the termination of the contract shows that Queens Alliance “is not qualified” and “doesn’t understand the most basic rights and confidentiality of clients.” She said the residents will be “absolutely up in arms” if another proposal is made for a shelter at that location.

“If another qualified agency is doing that, it is still the same end result for us so the comfort level is not going to be dramatically improved,” said Lam. “We know from the other shelters how it affects the neighborhood. The last thing we want to see is my neighbors selling their houses.” She reiterated that the objections are due to the location in the middle of a residential block. “The intention is good to house the homeless, we’re all for it, but the location is very poor. They should pick a commercial or industrial strip where you don’t have so many young children around.”

Editor's Note: This version has been corrected as the original article incorrectly attributed information to the HRA spokeswoman regarding Queens Alliance's future involvement in the site.
Posted by The Forum Newsgroup at 2:30 PM