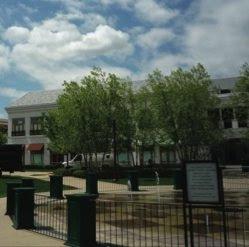 With the future of the Shops at Atlas Park up in the air, rumors are circulating that the shopping center’s former owner will try to reacquire the property after losing it to foreclosure earlier this year.

Damon Hemmerdinger, whose family’s ATCO Properties developed the upscale Glendale shopping mall three years ago, is now listed as principal of ATCO Advisory Services, which some community leaders believe was formed recently with an eye on purchasing the property at a foreclosure sale likely to take place early next year.

Hemmerdinger, son of MTA Chairman Dale Hemmerdinger, did not return a message seeking comment on the family’s intentions regarding the property at 80th Street and Cooper Avenue. Anchored by a movie theater and several restaurants, the shopping center failed to take off as a result of the economy and what some say is a poor selection of stores given the local clientele.

However, several community leaders say they’ve heard rumors that the Hemmerdingers might be positioning themselves to regain the property, which they lost in February after defaulting on the $128 million loan ATCO had from two French banks. “I don’t know anything specific, but what I know about bankruptcy and real estate, this is not an unusual maneuver,” said Kathy Masi of the Glendale Civic Association, who was aware of the rumors prior to a recent published report on the Hemmerdinger’s plans.

Lydon Sleeper, chief of staff for Councilwoman Elizabeth Crowley (D-Middle Village) said he also heard similar rumors but said the council member’s main concern is that the shopping center is beneficial for the surrounding community, no matter who is running it.

While there were clashes between ATCO and the community regarding issues including the MTA’s decision to reroute the Q45 bus to the mall, Masi said the day-to-day operations and conditions at the mall were better when Hemmerdinger was at the helm. “I haven’t had the same type of communication with Mattone,” she said, referring to the Mattone Group, which took over the mall’s management following the foreclosure. “It’s not like having the Hemmerdingers, who built it and had their heart and soul in it. It’s a little different now, about business and not personal pride.”

Masi questioned some of the retailers that the mall’s court-appointed receiver, Paul Millus, is pursuing for the property’s vacancies. “I don’t hear any rumbles of anything I would like to see go in the mall. A Western Beef, we certainly don’t want that. There are rumors the community is crying out for a supermarket, but I don’t hear that and I think I have a better [understanding of] the pulse then they do… Clearly, Mr. Millus made no bones about it, they’re here to turn a profit, and they’re trying.”

While she was “shocked” to hear rumors of a possible reacquisition by ATCO, Masi said she would have no objections if the Hemmerdingers regain control. “The Hemmerdingers clearly have more heart and soul invested in this than anyone else. You can walk into the mall now and see dead plants,” said Masi. “Damon would never have allowed that, he had too much pride in the building.”

Still, Masi made one thing clear – like many, she felt the MTA’s decision to reroute the Q45 bus was a “despicable” move that happened as a result of the senior Hemmerdinger’s clout as MTA chairman. “I think the community will deal with those issues in a much more aggressive way moving forward. We won’t allow anyone to say how it’s going to be,” she said, calling prior issues with the mall “a real learning experience.”

Millus said he will be in place as the court-appointed receiver until the foreclosure sale, which likely will take place at the end of the year or early 2010. In the meantime, he is working to attract “the proper mix” of retailers “that provide the adjacent community things they want to buy” such as electronics, clothing and more restaurants. “I think the primary focus should be on the beautiful idyllic setting where people come to shop for a variety of needs,” he said.

Millus is also working to find a tenant for the former location of Orange café, and is attempting to address the parking situation – a major source of criticisms from residents due to the cost - with the banks. A limited trial offering an hour of free parking is in place and employees have been given a discount on the parking garage rates in hopes of getting their cars off local streets. “I have certain suggestions and am working with the bank to address their revenue concerns. I hear the concerns of the community and hope to do more about it,” he said.
Posted by The Forum Newsgroup at 2:20 PM