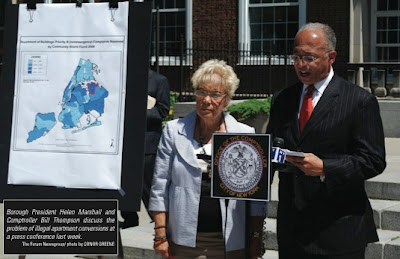 The city Building Department’s response to the issue of illegally converted residences is “inadequate,” according to Comptroller William Thompson, who argues that the inability of inspectors to gain access to homes is a major problem.

The audit’s findings, which the mayoral candidate released alongside Borough President Helen Marshall at a press conference last Wednesday, reaffirm what many residents, civic leaders and elected officials have long known - landlords are tempted to carve buildings up into smaller units due to lack of enforcement, putting a strain on city services and placing residents and firefighters in danger.

Inspectors from the DOB’s Queens Quality of Life Unit, created to respond to illegal conversions, were not able to gain access to almost 40 percent of the properties that had complaints filed against them in fiscal year 2008, according to the audit. Despite multiple visits to many properties, inspectors were unable to gain access in about two thirds of field inspections made that year. The DOB requested access warrants for less than one percent of the properties inspectors couldn’t access.

“This is simply disgraceful. Illegal conversions not only reduce the quality of life in a neighborhood by causing overcrowding and placing a strain on essential services, but pose serious safety risks by creating potentially unsafe living conditions and causing noncompliance with building and fire codes,” said Thompson.

Marshall, speaking with Thompson in front of Borough Hall, said this is a problem she has tried to address for years. “The problem that has been persistent has been access,” said Marshall. “Access has always been the problem... So many people are living in overcrowded situations.”

Thompson and Marshall called on the city to hire more inspectors. “Without the inspectors it doesn’t work,” said Marshall, noting that the problem puts a strain on a host of services including schools, sanitation and infrastructure, in addition to the safety concerns. She also mentioned a recent fatal fire in Brooklyn in an illegally converted rooming house.

Under DOB procedures, an inspector is required to conduct a follow up visit if access isn’t gained during the first attempt. If there is no access on the second attempt, the complaint is closed. The DOB can request access permits from the state Supreme Court in cases where access was denied and inspectors found visual evidence of an illegal conversion. However, warrants were requested in less than one percent of cases, according to the audit.

“Considering the potential risk to the public, the DOB must make a greater effort to obtain access warrants,” said Thompson, who charged that the current system is a waste of resources. “If necessary, the DOB should consult with the city’s [attorneys] and seek a change in legislation to allow it to impose fines on unresponsive property owners. Having the ability to enforce such penalties would be an incentive for property owners to allow access more readily, thereby discouraging illegal conversions.”

In response to that recommendation, DOB Commissioner Robert LiMandri wrote that the department “agree[s] in part and disagree[s] in part.” The Queens Unit will work with the legal staff on obtaining warrants, but notes that the application must be supported by evidence an illegal conversion may exist, such as separate gas or electric meters, separate mailboxes, doorbells, intercoms and entry doors.

“We agree that in service of obtaining access, the [DOB] might consider legislative remedies for imposing incremental fines on property owners or occupants who fail entirely to respond to [inspection attempts],” wrote LiMandri. “However... we disagree that the Department has the authority to penalize a property owner or occupant for failing to provide access.”

In its written response to the audit, DOB “generally agreed with 12 of the 14 audit recommendations,” according to Thompson. In a statement, the DOB said the report’s authors “ignored the facts and recommended procedures that are already in place.” The department calls illegal conversions “a very serious matter” with more than 2,200violations issued last year in response. “We will continue to pursue a variety of enforcement actions to protect New Yorkers from illegal conversion hazards.”

Local civic leaders and elected officials say this problem is at the heart of many quality of life issues plaguing neighborhoods across the borough. Robert Holden, president of the Juniper Park Civic Association, said that group has been fighting against illegal conversions in the Maspeth and Middle Village area for years and has witnessed the strain overcrowded living conditions puts on a neighborhood.

“Illegal apartments are a tremendous burden to the community and put everyone at risk. More often than not illegal tenants are put in jeopardy living next to oil or gas burners with limited egress. Other tenants and neighbors living above or next to the illegal apartments must deal with the real dangers of fire,” said Holden. “The community is overburdened with more cars, noise and overcrowded schools and services. It definitely has a negative impact on the quality of life.”

Corey Bearak, president of Queens Civic Congress, said the audit brings “new attention to a significant quality of life problem long endured in Queens.” He echoed the call for legislation regarding inspector access, calling it a problem “City Hall can no longer afford to ignore.”

Aside from the safety and quality of life concerns, illegal subdivisions are costing the city money, both Thompson and Holden pointed out. According to the comptroller’s audit, the cost to the city of no-access inspections was more than $149,000. “If we were to factor in the administrative time spent by supervisors and other personnel, the cost to the city was even greater,” he noted. Said Holden: “Of course most illegal landlords don't claim the rent revenue on their taxes and we all lose again.”

City Councilman Eric Ulrich (R-Ozone Park) said much of the problem simply comes down to not having enough inspectors. “The larger problem is, there simply aren’t enough building inspectors to stay on top of all these complaints,” he said. “How do these inspectors stay on top of it when DOB doesn’t have the manpower it needs to enforce laws already on the books?”

In Ulrich’s south Queens district complaints about illegal conversions come from all neighborhoods covered by Community Board 10, according to Chairwoman Betty Braton. “We get complaints from every neighborhood in Community Board 10,” she said. “Most of our [non emergency] Building Department complaints involve such conversions, many involving alterations to homes that create dangerous living areas in cellars or attics.”
Posted by The Forum Newsgroup at 3:10 PM

what a joke
now comptroller thompson decided there should be more inspectors for the illegally converted homes.
where was mr.thompson & helen marshall when the converting was being done and more so where were all the big shots who only know tp get their pictures in the papers.if their jobs were being done you wouldn't need inspectors because those conversions should never have been approved.
how about my new neighbors who built homes attached to their homes and call them extensions,i am talking about whole homes with everything from kitchens to attics,so what good will an inspectors do now?
every school is over crowed,crossbay blvd has become a parking lot,the traffic is terrible.
so can someone explain where did ALLthose building permitts come from.
also this probably won't get printed,because when certain people are involved the comments don't get printed.

what a joke
who issued all these permitts to begin with?
why blame the inspectors when there are are people building houses attached to houses and they call them extensions.
not one of the people that server are communitity are doing anything for queens,which by the way has become so over crowed you can't even drive on crossbay blvd unless you intend to spend at least an hour going from point to point b.
shame on all of you for not protecting the citizens of queens,who elected you to keep something like this from happening.

Illegal Conversions and absentee landlords are Middle Village's biggest problem. The city has failed miserably to address dangerous conditions throughout the neighborhood. If it's not a Manhattan issue Bloomberg doesn't care about it. Why would anyone in Queens even consider voting for this dictator?

THE OWNER NEXT TO OUR HOUSE IN GLENDALE RENTS OUT HIS BASEMENT AND HIS GARAGE. THE BASEMENT RENTER PLAYS LOUD MUSIC UNTIL 1AM HAS TWO CARS HE PARKS ON THE STREET, SOMETIMES IN MY DRIVEWAY. THE OWNER OF THE HOUSE LIVES ON THE SECOND FLOOR AND RENTS OUT HIS GARAGE TO A CONSTRUCTION VAN WHO WARMS UP HIS TRUCK FOR A HALF HOUR IN THE WINTER, POLLUTING THE ENTIRE NEIGHBORHOOD. WE'RE SICK AND TIRED OF THIS, LEAVING FOR A SANE ENVIRONMENT.

Almost half of my block in Glendale rents their basements. One guy has two families living in his cellar. I called 311 and they gave me the Buildings Department expert. Ten months later and there's no change. Some expert.