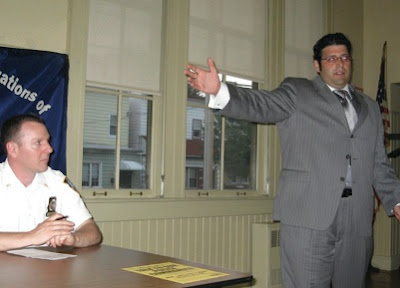 This month’s COP 104 meeting, held last Wednesday in Maspeth Town Hall, was a quick session because the officers who usually attend were called to an emergency in Glendale.

With Deputy Inspector Keith Green and Community Affairs Officer Tommy Bell called to Glendale to help coordinate the search for a missing 86-year-old man, Lt. Jeffrey Wellbrock took over the meeting duties. Filling in at the last minute, the lieutenant didn’t have details on recent crimes in the area, but provided residents with a chance to air complaints about quality of life issues.

Over the past 28 days, Lt. Wellbrock reported that major crime is up 2.9 percent, but down eight percent so far this year. The only category with a major increase was burglaries, up 25 percent over the past month. Officer Bell later said there is no current break-in pattern within the precinct but noted that Ridgewood remains the hardest hit area.

A resident kicked off the public comment portion of the meeting with a complaint about the pedestrian overpass at the Long Island Expressway near Mazeau Street. She reported drug dealing and drinking at night on the Middle Village side. “Every night he sees it,” she said referring to her husband who routinely walks the dog there. “I wouldn’t even walk over it during the day” due to garbage and debris, she added.

The lieutenant said the precinct would send officers over there to check on the situation.

Next up was Bob Doocey, who related a complaint from a friend who lives on 68th Avenue near 79th Street regarding excessive noise from motorized scooters. “All he hears all night are scooters - he’s being tormented,” said Doocey, adding that the family has a three-year-old baby that is also kept up by the noise.

Dominick Dale from Councilwoman Elizabeth Crowley’s office said a resident called their office with the same complaint. “Obviously there are several issues... This is a serious quality of life issue” that threatens public safety, he said, suggesting tougher legislation regarding seizing scooters might be needed.

In response, Robert Holden of the Juniper Park Civic Association pointed out that the police already can seize vehicles - if they can catch them. “There are not enough cops. The legislation is there,” he said. “However, they’re tough to catch because they buzz around and we don’t have enough cops.”

Roe Daraio, president of Communities of Maspeth and Elmhurst Together told Dale she would like legislation that allows cops to ticket commuter vans illegally operating in local neighborhoods. “If they can ticket trucks for off-route, they should be able to ticket vans.” She said issues with commuter vans include safety concerns, lack of accurate route sheets and instances of access being denied based on race.

The problem of auto repair shops using the sidewalk and street to repair and store vehicles, especially along Flushing Avenue near 61st Street, has again gotten worse, reported Tony Nunziato. “The vehicles are everywhere. You cannot walk down the sidewalk,” he said. “I keep getting calls about it, justifiably... They’re using it as a parking lot.”

Dale said that Crowley’s office tackled the problem several weeks ago, resulting in tickets issued by several agencies and the towing of vehicles. He promised to push agencies including the Sanitation Department to again visit the location. “We will keep doing it until they realize it’s a problem area that needs to be heavily monitored,” he said.

Officer Bell reported this week that the missing man returned to his Glendale home Thursday morning following an exhaustive search.
Posted by The Forum Newsgroup at 2:35 PM