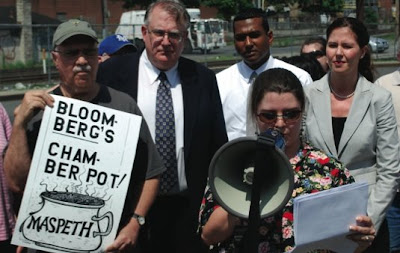 Several dozen Maspeth residents and community leaders gathered at the Clinton Diner on Rust Street to protest the city’s plan to have garbage trucked through local streets, and to call on the city to buy the former St. Saviour’s property for parkland.

Saturday’s rally, which was organized by Christina Wilkinson, attracted officials including Councilman Tony Avella (D-Bayside), Councilwoman Elizabeth Crowley (D-Middle Village), several state assembly candidates, civic leaders and representatives for other elected officials. It focused both on the city’s solid waste plan and the need for green space in the area.

Under a proposal aimed at removing long-distance truck trips, local residential trash will be brought to Waste Management’s transfer facility on Review Avenue, which will be expanded. From there, it will be placed on trucks and driven one-and-a-half miles to the rail yard at Rust Street and Maspeth Avenue. It is that aspect of the plan that has angered locals, as it will result more than 100 local truck trips per day.

Instead, residents, officials and Community Board 5 members want Waste Management to construct a rail spur directly on its property or to utilize the adjacent Newtown Creek to eliminate the need for more trucks on Maspeth streets.

The rally was also called in response to a related issue – the push for the city to acquire the former St. Saviour’s property as the site for a new park, which is needed in that area. Last year, the Juniper Park Civic Association removed a historic church building from the property, which is across the street from the rail yard. While the church will likely be rebuilt on land in Middle Village, the property remains vacant and is being offered for sale for $8 million.

Wilkinson noted that the current projection of more than 100 local truck trips per day “is just a starting point” and likely would be much higher in future years as the city’s population continues to grow. “There are more than enough trucks already in Maspeth residential streets where they don’t belong,” she said. “This is really ridiculous – stop dumping on Maspeth.”

State Senators Joseph Addabbo (D-Howard Beach), who was represented at the rally by aide Jeff Gottleib, and George Onorato (D-Astoria), who issued a statement, both support the efforts. Gottleib suggested that Waste Management instead pursue the former Phelps Dodge property and build a rail spur connecting to the LIRR Montauk line. “There is something they’re not explaining to us,” he said.

“Like others here today, I think there must be a better way to deal with our garbage disposal issues in Queens,” said Onorato. “This plan by Waste Management will have a negative effect on our residential neighborhoods, our general daily quality of life, and the public health. The heavy truck traffic will only add to the air pollution that already plagues our community and results in higher instances of asthma and other health problems.”

The senator instead suggested that Waste Management look into using rail spurs or the Newtown Creek to move the trash. That sentiment was echoed in a letter to the company by Crowley. “I believe I speak on behalf of my constituents when I say the current proposal must be adjusted before the community can embrace this plan,” she wrote to Jim Van Woert, senior district manager.

Crowley notes that community leaders and groups including Community Board 5, which voted against the current plan, have suggested alternate proposals. She suggests either building a rail spur at Review Avenue or acquiring the Phelps Dodge site.

“Maspeth has been dumped on for years [and] across the street we have the opportunity to build a park,” Crowley told the residents at the rally. She called on Mayor Michael Bloomberg to allocate funding needed to provide the area with its “fair share of green space.”

Several of the candidates running for the vacant 38th District Assembly seat suggested legal action might be needed. Farouk Samaroo argued that, unlike many other instances in the city, this might be an appropriate use of the city’s powers of eminent domain. Since it would be for a true public use, it would be a more appropriate use of eminent domain than turning private land over to developers with political ties, he argued.

“As a citizen and an aspiring public official, I fully support using the right of eminent domain to make this park a reality,” he said. “I challenge anyone to tell me why a public park is not a permissible public use.”

One of his opponents, Albert Baldeo, said that the residents could file a lawsuit against the plan, especially if changes suggested by CB 5 aren’t taken into consideration. “If that is not done, we are all aggrieved citizens here,” he said, adding that a lawsuit focusing on the environmental impacts might be appropriate.

Waste Management officials previously said in a statement that the project is in accordance with the solid waste plan approved in 2006 by the City Council. Crowley, who wasn’t in office at the time, said she doesn’t think council members “knew the nitty gritty details” at the time of the vote. “For them [Waste Management] to pass it off to the City Council or Sanitation Department is ridiculous,” she added.

Avella, who is also a mayoral candidate, said his philosophy as an elected official is that “nobody knows their block better than the people who live there” and wondered aloud why the city isn’t listening. “We have to change the very way we do things.” He called for “community-based planning” where the residents have real input into the planning process.

“We have to take care of the people who live in the neighborhood,” said Maspeth resident Tony Nunziato. “This is a case of waste not managed.” He stressed that this isn’t a case of residents fighting against a proposal in their backyards. “This is not NIMBY – this is a case of put it in the right location,” he said.

Wilkinson said the St. Saviour’s property has been used to store Dumpsters since 2005and reported that the city Buildings Department issued a full stop work order for the site on July 17th. She urged nearby residents to continue reporting any illegal activities on the property, including storage of Dumpsters that contain trash.

In his statement, Senator Onorato supported the effort for parkland in West Maspeth. “Speaking of our environment, I am also pleased to lend my support to the effort to bring a new park to western Maspeth at the former St. Saviour’s church site,” he wrote. “This site is now being used as a garbage dump, and there is no question that the area could be put to much better use as green space that could be enjoyed by all members of our community.”

In an interview Tuesday, Crowley said that the battle to force Waste Management to revise its plan “is not over.” She said this is another situation that began years ago that she has been forced to try to rectify since taking office. “I don’t know what Dennis Gallagher was thinking at the time,” she said referring to the area’s councilmember when the solid waste plan was approved. She said it “would have been fair” for the council to demand that Waste Management construct a rail spur as part of the project.

Crowley also said there is a possibility of winning the battle for a park at the St. Saviour’s property. “I don’t think it’s just a pipe dream,” she said. “I think that rally was a step towards pressuring the mayor to put city dollars for what he speaks in favor of – more parks, especially in neighborhoods that have not seen their fair share. That part of Maspeth does not have enough green space… But that’s the type of money that takes a mayoral initiative.”
Posted by The Forum Newsgroup at 2:55 PM

What woke up all of these elected officials and so-called civic leaders? The St. Savior's property in Maspeth has been sitting there for years. Where were Congressman Joe Crowley and Assemblywoman Margaret Markey? Do they even represent Maspeth anymore?

bloomberg continues to dump on maspeth, nothing new here.