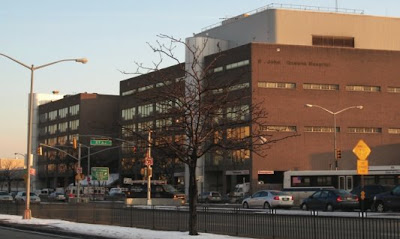 Executives from a Manhattan-based development firm held an informal meeting last week with Community Board 4 members to present their vision for the future of the St. John’s Hospital property on Queens Boulevard, which is set to be sold at auction next month.

Dan Panitz and Justin Green of HaysVentures, LLC, a real estate firm specializing in commercial and retail real estate sales, investment, and development, met last Thursday in the CB 4 offices to unveil a plan for the property that features a combination of medical services, retail space and educational uses.

Panitz assured the board that the company is not interested in building residential units at that site. “We don’t need another shopping mall, another residential development,” he said. “We need to serve the needs.” Panitz, who grew up in the area and formerly served on the community board, stressed that he is “not just some suit, some developer, coming to the community” to develop the site “at the expense of the community.” He said the firm requested the meeting so it could receive feedback from residents as to what they would like to see at the site.

The building has sat vacant since St. John’s Hospital closed in March along with Mary Immaculate Hospital after its parent corporation went bankrupt. Panitz revealed that HaysVentures was behind a $43 million offer submitted by a private investment firm that sought to save the hospitals. “Our goal was to save the hospitals, not to shut them down,” adding that a deal fell apart at the eleventh hour. “It broke our hearts,” said Panitz, who recalled receiving stitches in the St. John’s emergency room as a child.

The company has since submitted an offer for the property, which will be sold at an auction in August, according to CB 4 Chairman Richard Italiano. In a telephone interview on Tuesday, Panitz and Green refused to provide details regarding the offer. However, at the meeting Green said the company will be at the auction if the offer isn’t accepted before then, and suggested that he expects HaysVentures to obtain the property. “We will acquire the asset,” he predicted.

The plan outlined by Panitz centers on a “credible, cash strong” medical facility that would help fill the void left by the hospital closing. While he couldn’t specifically name the group he is in discussions with, he promised it would be a “high-level” ambulatory or in-patient facility the residents “would be very impressed and very happy with.” He said it would not be a substance abuse recovery center or serve as chiropractic or other similar type offices.

Panitz also touted a supermarket or other retail that will “serve the needs” of local residents. It was noted that many Elmhurst residents don’t have easy access to large supermarkets and are forced to pay high prices at local bodegas for staples such as milk and bread. Roe Daraio, president of Communities of Maspeth and Elmhurst Together, pointed out that an American-based chain is needed since there already are numerous ethnic supermarkets in the area.

Finally, Panitz discussed the possibility of an educational facility in part of the building. While some board members including Nick Pennachio argued that the area is already oversaturated with schools, it was noted that District 24 is the city’s most crowded. Panitz said the community must face the “brutal reality” and consider that it is much cheaper to convert an existing building than build from the ground up. He said the facility wouldn’t necessarily be a city-run public school, listing private or technical schools as possibilities.

“We have to face this reality that we have to put educational facilities in District 24,” said Panitz. The company’s research showed that space for children in kindergarten through grade six is especially needed. “It would almost be like three buildings, four buildings in one,” he added of the final product his company envisions.

Pennachio suggested developing office space that would be used during business hours to avoid bringing huge amounts of traffic to the area on nights and weekends. However, Panitz said that would be a “good way for me to go out of business” and explained that office space vacancies are currently sky high around the city. “It would be suicide for a guy like me to do that,” he added.

Other suggestions included a multi-purpose center that could serve residents of all ages, or a restaurant such as an IHOP.

Throughout the meeting, Panitz stressed that he was there to hear what the community needs. “Instead of having some guy with a briefcase buy this and put in residential, we can solve a lot of problems here,” he said. “It’s expensive doing this stuff [so] I need to know we’re all on the same page.”
Posted by The Forum Newsgroup at 3:00 PM

Just remember one thing at next elections. How the democratic party turned its back on the residents of Middle village.Glendale,Rego Park,Woodside and woodhaven