A Change of Tide for Broad Channel 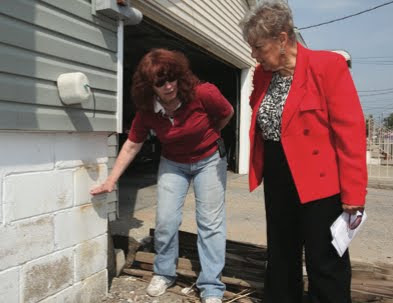 “Last month at a meeting held at my office, many of you came with your spouses and your children…to discuss a problem that has plagued your community for decades,” Marshall said. The boro president went on to speak of eyewitness accounts about fire trucks and ambulances that were unable to reach residents in need of emergency services due to flooding conditions. Families had reported to Marshall that they were stricken with fear of electrocution and falling wires every time the tide rose.

A NY1 video showed dramatic images during a recent flood clearly demonstrating that residents were unable to park their cars on the street without risking hundreds of dollars in damages. The city project that addresses the problem was moved to begin in 2015.

Referring back to the prior meeting with residents at her office, Marshall continued, “I promised you on the day that you came to my office that I would not allow that to happen,” referring to the 2015 project start. “I am here today to announce that the project…has now been moved to the city’s budget for the fiscal year beginning in July.”

The $24 million area-wide project that Marshall spoke of will begin on West 12th Road and will also include additional streets that will be incorporated in order of the severity of needs. The Department of Transportation (DOT) and the Department of Environmental Protection (DEP) will both be at the seat of the project.

Work is scheduled to commence with the DOT conferring with the CB 14, elected officials and the community at large to ensure the project is fully scoped and completed in a timely fashion. Officials say the design of the project will begin in July and construction will start at the beginning of next summer.

Marshall further offered her pledge to meet with everyone that has a stake in the project to kick-off the working sessions and to keep the project on track. “I came here to announce that your voices have been heard and the tide has turned.” "The plan is to do the design over the next year and to begin construction a year from July. But I don't know how long that construction will take," said Queens Department of Transportation Commissioner Maura McCarthy.

Lifelong Broad Channel resident and community activist Ed O’Hare says that he remembers the problems with 12th Road as a child. “It was always bad on 12th Road. Now a lot of other streets that used to be ok are flooding,” said O’Hare.

The reason for the more recent flooding he says is due to the installation of storm sewers in the community that cause a back up because there is no check valve system in place. “We are all so used to the flooding and the problems and danger it brings. I hope the new plan will fix the problem but for now we remain at the mercy of the tide.”
Posted by The Forum Newsgroup at 1:50 PM