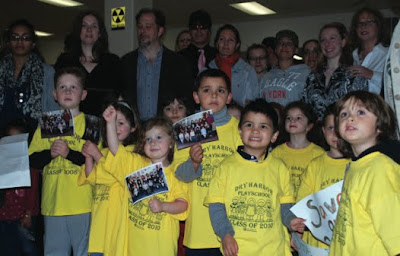 Worried that time is running out as the summer quickly approaches, a group of parents and young students showed up at last week’s community board meeting to seek help in their fight to keep city run playschools, including Dry Harbor in Glendale, open.

However, while the parents said they were relieved to hear that the Parks Department, which runs the playschools, has finally agreed to meet with state Senator Joseph Addabbo (D-Howard Beach) about possible solutions, a Parks spokeswoman said Wednesday that the decision has been finalized.

“These five Parks programs in Queens, serving a total of approximately 75 children, are permanently discontinued and will not be reopened,” said the spokeswoman. “The services are duplicated by other facilities in the same area, and parents affected by the measure have the option of enrolling their children at these public and private high-quality centers.” She didn’t say how much will be saved.

Last week Community Board 5 member Brian Dooley, who is also president of the Glendale Property Owners Association, asked his fellow residents to join the effort to save the program, which provides an educational program for children ages three and four in a building at the Dry Harbor Playground, and other locations across the city.

“We all need to group together as a community to try to keep this school open,” said Dooley, who attended the program as youngster. “It was a great place to go when I was a kid, and it’s still a great place to go. It’s hitting us at a hard time.”

After Dooley spoke, several parents – joined by several dozen children who attend the program – stressed that the program is invaluable.

“It’s a wonderful program and it’s an important program,” said Charles Suffel, who has been leading the charge to gain the support of elected officials and convince Parks to reverse course. “This is about education, about kids having a place to go that’s safe, clean and progressive.”

Suffel said the parents have tried to work with Parks officials, to no avail. “We’re trying to find a middle ground with Parks,” he told the audience at last week’s CB 5 meeting. “We’ve asked for options, but we’ve gotten none. We don’t want to be the crazy people on the steps [of City Hall], but what more can we do? They won’t talk to us about how to keep it open.”

Tara Norvez has had six children attend the school, which costs $1,300 for a four-day week and is slated to close this summer, but fears her youngest child won’t have that same chance. “I really feel like the middle class in this city is really getting squeezed out,” she said. “This program has been doing more with less for 30 years... This is an academic program that surpasses Universal Pre-K in many areas” and costs roughly half as much as private programs, she added.

One of the Norvez children to graduate, Aiden, spoke about the impact it had on him nine years ago. “One of the things [our teacher] taught us is that we have to stand up when we see something wrong,” he said. “We know closing Dry Harbor is wrong. It would be a real shame if next year’s kids were deprived of this opportunity.”

Addabbo said Wednesday that his initial meeting with Parks has been postponed, but he plans to continue the fight to keep the school open at Dry Harbor in some form, despite Parks’ latest statement on the decision.

“It is still my intention to have a meeting just to go over what the options are for the parents, possibly under a different structure if we’ve exhausted all the possibilities for Dry Harbor Playschool as we know it,” he said. “I’m working on this meeting so parents are afforded the opportunity to know what their options are for the preschool as it exists now or in the future under a different form.”
Posted by The Forum Newsgroup at 1:40 PM