Queens Put to the Taste Test 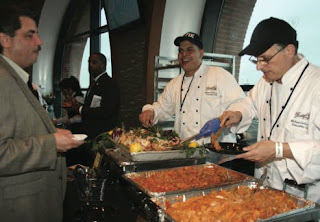 For a change there were no disappointed Mets fans at Citi Field this Tuesday night. In the absence of the home team, the Queens Economic Development Corp. hosted their annual fundraiser, “Queens…A Taste of the World.”

About a thousand “tasters” paid $100 per head to attend the event held at the Caesar Club in the stadium. “It’s just a great event to bring a friend or client to, great food, lots of choices, great conversation topics and you get to walk around and interact with the crowd,” said Deborah Trebel who has been coming to the taste for the last six years. Indeed, since its inception eight years ago, it has fast become one of the most anticipated sampling events in the city.

More than 40 restaurants and fine eateries served up generous portions of foods as diverse as the borough itself. There was something for every imaginable palette in the three hour eating extravaganza.

Lovers of German food were delighted with mini potato dumplings, Sauerbraten and Schnitzel from Zum Stammtisch of Glendale, while seafood lovers were rewarded with multiple helpings of shrimp, crab claws, oysters and clams from the raw bar at London Lennie’s. Crowds stood on line to sample the Miniature Pork Osso Bucco, lauded by the Food Network’s Dave Lieberman, and baked striped bass from Howard Beach caterers and restaurateurs Russo’s on the Bay and Vetro.

For lovers of the more exotic there was cerviche, Thai spring rolls and dumplings, and chicken Poblano with mole sauce. Sweet lovers were treated to a variety of confections including cakes, cookies, cupcakes, pastries and hand-dipped chocolates. And for the beverage connoisseur there were both original non-alcoholic and alcoholic choices for sampling.

Borough President Helen Marshall was on hand to commend QEDC on the tremendous success of the event and to introduce the panel of Taste Masters including celebrity chef Dave Lieberman of the Food Network and Anahad O’Conor, New York Times Reporter and cookbook author.

Among the awards handed down for the evening were the iconic Restaurant Awards set up to honor restaurants still in business after 50 years. Well known seafood restaurant, London Lennies of Rego Park and Mama’s of Corona both celebrated their 50 year mark in the business and received Golden Plate Awards.
Posted by The Forum Newsgroup at 1:20 PM