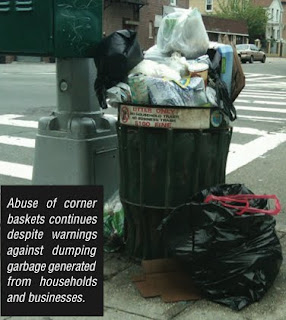 The Department of Sanitation (DSNY), says an article in a community newspaper in Brooklyn has sparked a rash of calls after it printed an article headlined “Sanitation Reduces Street Trash Collection.”

The article concerns the discontinuation of service dedicated solely to picking up public trash from corner baskets. But DSNY spokesman Matthew Lipani says all the article did was to alarm people about a measure that has been in effect since last year.

“The Department absorbed an $80 million budget cut last year. At that time, we had to stop dedicated pick-ups for corner baskets,” Lipani said, explaining that the choice was between cutting back on basket pick-ups or household pickups. Dedicated trucks for pick-ups at the corner baskets ended on July 1, 2009. The trash in these receptacles is now collected by household refuse trucks, but with much less frequency.

Lipani says cuts to the dedicated service were well established at public hearings. “It’s not something that was ever hidden,” he said. As a result of the cuts last year, the number of pick ups at the public trash receptacles has been reduced from as many as 20 times a week to just once or twice.

“The problem with the pails,” said one Woodhaven store owner, “is that they are used by businesses and residents who overload the pails leaving them to spill out onto the street.” President of the Greater Woodhaven Development Corp., Maria Thomsen says there is no problem with overflowing trash in her community thanks to the BID.

And elsewhere in Ozone Park, a basket near the office of Councilman Eric Ulrich was called into 311 and resulted in summonses being issued to five people who illegally dumped trash found in the basket at the corner of 93rd Street and 101st Avenue.