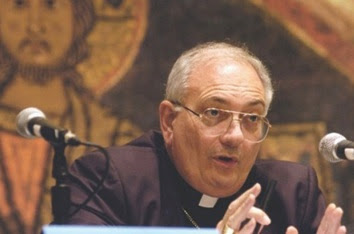 The separation of church and state is one that we have long heard bantered about. But a recent New York Post article that highlighted what some feel were rather irreverent comments by the head of the Brooklyn Diocese, Bishop Nicholas DiMarzio, may add dimension to a new brand of separation.

Last October, the Bishop held a legislative breakfast for New York state assembly members, senators, city council members and their staff at the Bishop’s residence. The group was divided into two rooms and the morning meal was punctuated by a lengthy lecture about the fiscal state of the Catholic Church.

But it was the aftermath of the financial briefing that has sent shock waves through many. Between the two rooms of legislators and lawmakers stood Bishop DiMarzio. He addressed a bill sent before the state legislature by Assemblywoman Marge Markey that would extend the statute of limitations for lawsuits involving the rape or molesting of children.

Joe Addabbo, who was a city Councilman at the time, was in the room. “The bishop stood there and made a very clear statement,” said Addabbo. “With regards to Markey’s bill he said ‘If you’re on it, I want you off it. If it passes and you vote for it, I’ll close a church in your district.”

Addabbo says the threats of the bishop were surprising, but none the less, the bill and the bishop’s comments have now become the center of a storm that pegs Markey’s proposed legislation as the potential bankrupter of the Catholic Church.

Insiders from the church say that they now feel that the Bishop’s remarks have swayed people in the opposite direction they would have hoped for. “If the Bishop had not tried to bully his way through this, the Markey bill would have gained no sympathy,” said one source who insisted on anonymity.

Addabbo says that the state senate that has about three more weeks to its session is not even talking about the bill. But he says there has been a surge of victims who have come forward to tell their harrowing stories of abuse since the news first broke.

Now a State Senator, Addabbo says lawmakers need to seriously consider the Markey bill that according to Addabbo “is severely restrictive and focuses on private institutions, namely the Catholic Church. We need to consider another bill by Assemblyman Vito Lopez that involves a broader range of inclusion and also focuses on criminal penalties.” Addabbo says that he hopes legislators can come to terms with this important issue and develop a bill that results in the best resolution for the victims.

Meanwhile, opponents to the Markey bill are still lining up to cry foul over the assemblywoman’s proposal. Community activist Tony Nunziato, who ran for Markey’s seat in the last election, says the bill should not be a consideration. “It’s directed only towards the Catholic Church or groups like Boy Scouts. If there is sexual misconduct in a public school, you have 90 days. If you don’t do it in 90 days, it’s done.”

And so now the wait begins. We have on more than one occasion come down on the opposite side of Bishop DiMarzio. His comments and lobbying tactics in this case are at best shameful. We hope the bishop was just having a really, really bad day. But the fact that count’s most here is the limiting and restrictive nature of Markey’s bill is a disaster not only for the church, but for the victims as well. Compromise must be set in place to derail the lunacy that has come spurting from Marge Markey.

Lastly this week, we came upon a rather sad and deranged blog entry we feel obligated to share. The blog has long been the suspected poison pen outlet of a certain former city councilman who decided that a privilege of his office was to sexually impose himself on a female victim back in the summer of ’07.

Now it appears he’s back blogging against another innocent bystander, Councilmember Eric Ulrich. Seems that the blogger found another Eric Ulrich, living in Garvin County Oklahoma who is accused of nine counts of lewd acts or proposals to minors. This limp attack was intended to poke fun at the freshman councilman but what about readers who may be foolish enough to take the confusion seriously. We have respect for many bloggers out there who do an earnest job of trying to bring news and opinion to local and national markets in a timely and interesting fashion. But then we run into a vehicle like this that does nothing more than attempt to discredit the reputable, mock volunteers and a host of other violations. We find the comparison of Oklahoma’s Eric Ulrich the molester and New York’s Eric Ulrich disgusting.

But if we had to add a little humor to the equation, how do you think Alabama’s Dennis Gallagher, who is a Space Plasma Physicist for NASA would feel about sharing his name with New York’s Dennis Gallagher, the convicted sexual offender. Bottom line, make sure the face goes with the name before you believe what you shouldn’t even be reading in the first place.

Until next week...
Posted by The Forum Newsgroup at 1:30 PM

Dennis Gallagher is a pathetic human being. A bigger loser would be hard to find. He's broke and will soon lose his house too.