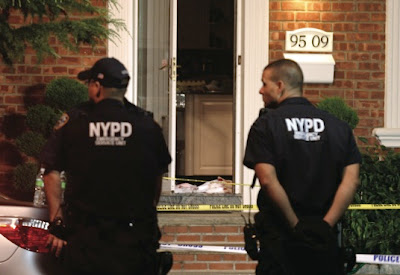 Romeo Antoniello had just arrived home when he was accosted by two bandits authorities believe followed him home to steal the receipts from the family pizza shop. Sources report the thieves were carrying rope and duct tape in order to tie up the family.

But something went terribly wrong in the attempted robbery. Geraldo Antoniello rushed to his fathers rescue as the men pushed their way into the house, striking Romeo in the head with the butt of a pistol. He fell to the floor and then his son fell next to him after also being struck by the gunman in the head.

Details about what transpired next are still not clear but reports say that Romeo’s wife, Gaetana was screaming to her husband and son from the basement of the house on her way upstairs after hearing the scuffle. Law enforcement officials speculated that Gerry was shot because he went up against the attackers. 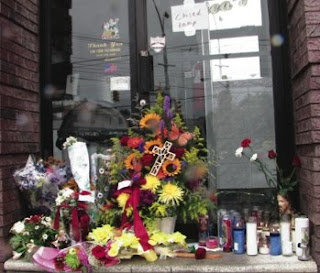 A source close to the family who spoke to The Forum on condition of anonymity said Romeo was unconscious for a brief time after being struck and does not have full recollection of what transpired while he lay on the floor. “All we know is that one of these animals said something and then fired his gun into the back of Gerry’s head,” the woman said.

Published reports and family sources all agree on the fact that an unidentified woman came to the door shortly before the elder Antoniello arrived home and was asking for directions to an obscure location out of the neighborhood. It is that woman whom police believe was sent to the house to get information for the two men stalking the family.

Police continue to hunt for the killers and are pursuing a vigorous homicide investigation. Deputy Inspector Joseph Courtesis of the 106th precinct says the crime, which occurred in his command is being investigated at the highest level of priority. “We have thus far investigated every lead and tip that has come through and we will continue to do so.” Courtesis told reporters a large number of personnel have been assigned to the case.

Anyone with information is asked to contact Crime Stoppers by calling 1-800-577-TIPS, by texting TIP577 to CRIMES, or by going to NYPDCrimeStoppers.com.
Posted by The Forum Newsgroup at 4:20 PM