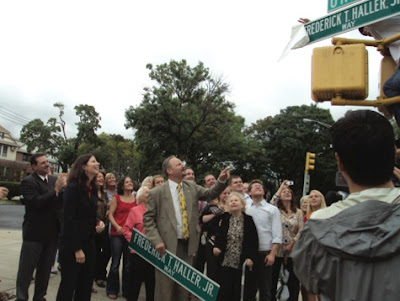 Hundreds of residents joined the family of Frederick T. Haller, Jr., members of the Glendale Civic Association and Councilwoman Elizabeth Crowley at a ceremony last weekend to rename a portion of the Union Turnpike after the longtime community activist.

As a member of the Parks and Recreation Committee on the City Council, Crowley successfully lobbied her colleagues to approve the measure, which co-names the stretch of Union Turnpike between Myrtle Avenue and Woodhaven Boulevard the Frederick T. Haller, Jr. Way. At last Saturday’s ceremony, she hailed Sept. 12, 2009 as the Frederick T. Haller Day in New York City.

“Frederick Haller showed endless generosity to our community through his charitable endeavors,” said Kathy Masi of the Glendale Civic Association, who helped organize the event. “He is missed by all the people in the Glendale community who are fortunate enough to have known him. He was a great man who not only left an impact on our community but a family dedicated to service for the greater good of their communities.”

“I am pleased to stand here before you to honor a remarkable member of our community,” said Crowley (D-Middle Village). “It is a privilege to be with Frederick Haller’s children and family to our community to recognize the impact their father made here on the people of Glendale. His children and their dedication to community service is, perhaps, Frederick Haller’s greatest legacy.”

Haller’s accomplishments include helping organize the first Home School Association at Sacred Heart School, serving with the Greater Ridgewood Historical Society, founding the Greater Ridgewood YMCA, serving as past president of the Glendale Kiwanis Club, chairman and member of Community Board 5 and a member of the Board of Trustees of Wyckoff Heights Hospital. Before his death on Dec. 30, 2007, he celebrated fifty years serving as an attorney at law to the Glendale and Ridgewood community.

As one of the original homeowners on Union Turnpike, the renaming has significant meaning to the family. Devastated by a family tragedy, the Haller family moved from their home in Glendale down Union Turnpike to Forest Hills. The conaming ceremony, held at the Greenstreets Triangle at Myrtle Avenue, marked a homecoming for the Haller family.

Masi later said she thought the event “went phenomenally” and said the turnout exceeded her expectations, despite the bad weather. “It was amazing, and had a lot to do with the fact that this was a guy who everyone loved,” she said. “In a whole year working on this, I didn’t come across a single person who asked why we were doing it… It’s a really good thing and I’m glad it finally happened.”
Posted by The Forum Newsgroup at 3:20 PM