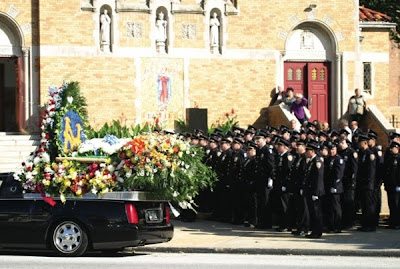 Everything was going right for Geraldo Antoniello. His job at a janitorial/maintenance company had just yielded a promotion and an impressive pay raise. The 29-year-old had taken another big step in his life—he bought himself a condo. In fact, he was excitedly preparing for his big move in the upcoming week.

But instead, Gerry was remembered last week by friends and family members as a “sweet guy who would do anything for you”, after a tragic turn of events last Wednesday evening left the 29-year-old dead at the hands of would-be robbers. 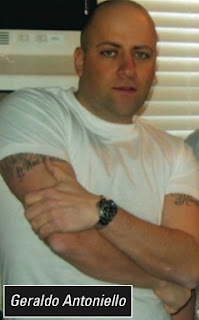 Hundreds gathered outside the Church of Nativity B.V.M. in Ozone Park early Monday morning for the funeral. A sea of uniformed officers from the NYPD lined the sidewalks outside the church in a show of respect for Gerry’s brother, 39- year-old Carmine, an 18-year NYPD veteran.

In the crowd were dozens of friends and customers from the family business, Romeo’s Pizza. Huddled together and waiting for the funeral procession to arrive they shared stories about Gerry and about his family. Over and over they expressed their shock and disbelief that this could happen.

"You couldn’t get a better guy," said friend Carmella Roffomagno. "It's just so unbelievable." Her son Frank was one of Gerry’s best friends. “He was looking forward to moving,” Frank told reporters. “He was going to have us all there for Sunday football.”

Inside the church, Father Paul Palmiotto spoke to Gerry’s family and friends. “We cannot explain the violence or the evil in this world. You might feel abandoned by God right now but you must remember that nothing can take your son’s love from you or yours from him. Gerry will live forever in your hearts.”

Gerry was the youngest of three Antoniello brothers and a close family friend told The Forum he was very close to his parents. “Gerry told his mother he would be leaving his bedroom set behind when he moved so that if his father was well enough to go away hunting, he would come home to sleep. He would never leave her alone in the house.” It is believed that the mother and son were packing things up for the move on the night Gerry was killed.

According to friends, the family is dealing with many hardships including Romeo Antoniello’s battle with cancer and extensive chemotherapy. “Every place they turn there is so much heartache,” said a regular customer at the store, Steve. “Now whenever you go to work you will remember where it began. And what about going home? How can this poor family ever face going home?”
Posted by The Forum Newsgroup at 4:10 PM

It's a terrible tragedy what happened to this family and their brave son. How come there isn't any sort of description of these felons, including the girl that rang the doorbell for directions? Were they invisible? If this was presumably a 'push-in' robbery, how are the people in this neighborhood, and others, to be somewhat aware of potential threats. Where are the police of the 106th Precinct in this matter? Are they puzzled or stumped? They are more preoccupied, it seems, with giving traffic tickets to drivers going past yellow lights. There sure aren't any increase in the amount of foot patrolmen in the neighborhood, either. I still haven't seen a single one. We pay our taxes! What's the deal?!?