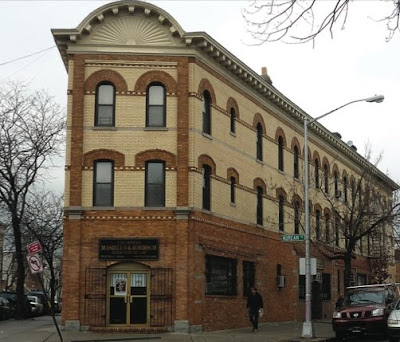 The effort to have Ridgewood’s historical neighborhoods recognized by the city took a step forward with the approval of the Ridgewood North Historical District and a public hearing on a plan to establish a similar adjacent zone to the south.

The city Landmarks Preservation Commission on Tuesday voted unanimously to approve the designation of the Ridgewood North Historic District, which consists of 96 distinctive multi-family residential and commercial tenement buildings built starting in 1908. Marketed towards working-class immigrants, the homes are known as Mathews Flats because they were built by the G.X Mathews Company.

Built on former farmland along Gates, Fairview, Grandview and Forest avenues and Woodbine and Palmetto streets, the three-story buildings were constructed in long rows of repeated designs with buff-and-amber-colored brick facades. Each included six separate residential apartments with five rooms and a full bathroom, as well as ample light and air supplied by central light shafts.

“These lively buildings were a substantial upgrade from earlier tenements, and served as a model for affordable housing at a time when New York City’s population was growing rapidly,” said LPC Chairman Robert Tierney. “They were innovative in plan, striking in style, and, remarkably, have remained unchanged since their completion nearly 100 years ago.”

The G.X Mathews Company was a prolific construction firm that was founded by German immigrant Gustave Xavier Mathews and his two brothers in Ridgewood in 1904. The company’s tenements in the district have Romanesque and Renaissance Revival-style details and feature geometrically patterned brickwork, stone entrance enframements, ornate cornices with decorative swag and garland and bluestone stoops.

The Mathews Flats design was thought to be such an improvement over previous forms of affordable housing that they were exhibited at the Panama-Pacific Fair in 1915. The company ultimately constructed more than 300 model flats in Ridgewood and hundreds of other buildings elsewhere in Queens, including Woodhaven, Corona, Woodside, Astoria and Long Island City before closing after Mathews’ death in the late 1950s.

In a separate action, the commission held a hearing on the proposal to create the Ridgewood South Historic District, which is adjacent to the north district and contains 210 buildings developed later. “A cohesive collection of speculative urban architecture, the tenements in the proposed Ridgewood South Historic District retain extremely high levels of architectural integrity and represent an important part of the development of the housing in New York City,” a document outlining the proposal states.

Ridgewood civic leader Paul Kerzner said he thought the hearing went “very well” with nobody speaking against the proposal. He hopes that the south district will be approved by the end of the year, and noted that 2,982 buildings in the neighborhood were added to the state and federal historic registers in the 1980s, meaning the city is just beginning to catch up. He said the ultimate goal is to gain landmark status for the remaining 2,626 buildings the city hasn’t yet considered. “If we do it in the same process as they’re doing it, it will take about four to five years,” he said. “We’ve done three of 18 areas [including Stockholm Street years ago] so I promised the commissioner I’ll be back 15 more times.”

Kerzner noted that the LPC’s standards are “very high,” meaning approval of the historic district carries a lot of weight. “Those of us who have spend a lot of time in Ridgewood or who own Mathews Flats are kind of jaded and don’t see them as significant, just as housing,” he said. “I thanked the LPC technical staff for bringing to our attention the significance of these buildings, which were built for working class people, and 100 years later they are still being used by working class people.”
Posted by The Forum Newsgroup at 3:00 PM