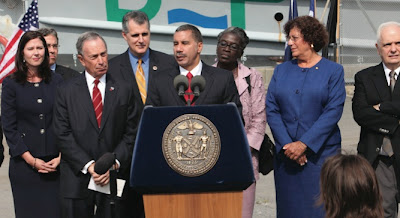 Borough residents may finally get relief from constant property flooding in the form of nearly $46 million in federal stimulus money that will be used to upgrade water and sewer systems in southeast Queens.

Projects that will be funded include upgrades at wastewater treatment facilities in Brooklyn, Queens, Staten Island and the Bronx, and measures to reduce flooding caused by heavy rain in hotspots throughout the city, including portions of southeastern Queens. In addition, “green streets” will be created in Middle Village and Glendale to help collect storm water and prevent local streets and homes from flooding.

“Reinvesting in our water and sewage infrastructure is a basic need that has been neglected for too long,” said Crowley (D-Middle Village). “While this is a step in the right direction, a lot more needs to be done, especially for the communities still feeling the repercussions of the 2007 storms.”

While green streets are being created on Dry Harbor Road, 82nd Place and Juniper Boulevard North, Crowley is calling on the city to do the same along 77th Avenue, Penelope Avenue and in Maspeth near Maurice Avenue. “I am pleased that the Department of Environmental Protection commissioner has agreed to look into these additional areas per my request and I will continue to work with him to ensure the storm infrastructure of our community is adequately addressed,” added Crowley.

Paterson and Bloomberg noted that the money will go towards much-needed projects, some of which have been on hold for several years. “These projects will provide a bounty to New York City by saving money through increased energy efficiency, protecting our waterways through improved wastewater treatment, reducing flooding after heavy rains and restoring precious wetlands,” said Gov. Paterson.

Added Bloomberg: “The infusion of stimulus dollars for water projects will bolster our aggressive programs and help us improve water quality in our rivers and bays, and reduce flooding in areas that have long suffered from storm water flooding – particularly in southeast Queens.”

Pheffer (D-Ozone Park) noted that nearly $18 million has been designated for reconstruction of the substation and switchgears of the Rockaway Water Pollution Control Plant, which she called a key component in the sewage treatment system, designed to help ensure the ecological vitality of Jamaica Bay.

“This funding is vital for our city to ensure that we protect our waterways while increasing our energy efficiency, improving wastewater treatment, reducing flooding in our communities and at the same time providing much needed jobs for area residents,” said Pheffer.
Posted by The Forum Newsgroup at 2:50 PM