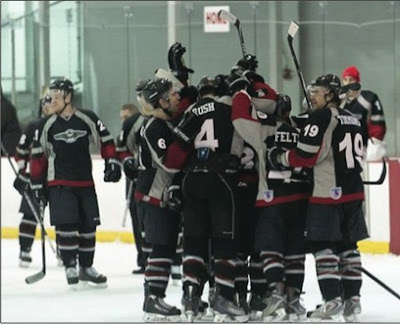 As New York City was being buried by snow throughout January, the New York Aviators of the Federal Hockey League (FHL) buried 10 consecutive opponents with a barrage of goals, stellar goaltending and physical play. In fact, beginning with the A’s December 30 victory over Danbury, they are riding a 14-game winning streak and a 18-2 home record at the Aviator Sports & Event Center on Flatbush Ave., in Brooklyn.

The performance was especially impressive as two of the A’s top players, defenseman David Inman and forward Mike Thompson, were called-up to Elmira and Wheeling of the ECHL during January.

The streak has moved the A’s have into third place, seven points ahead of Danbury, just five points behind 1000 Island and 10 points behind Akwesasne. The top four teams qualify for the FHL playoffs.

The Aviators have three games this week: Feb 11 at 7:05 pm vs Cape Cod at Aviator and then a pair of games on Feb 12 and Feb 13 at Danbury. Tickets are still available by visiting newyorkaviators.com or by calling 718-758-7580.
Posted by The Forum Newsgroup at 11:37 AM