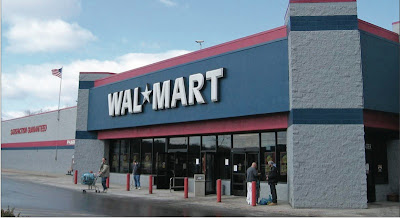 Opposing rallies were held outside City Hall last Thursday as the City Council held hearings over the possibility of a New York City Walmart. A project the size of a typical Walmart store would require City Council approval, but Walmart is reportedly looking at smaller lots—notably the Gateway II plaza in East New York—which would not require zoning approvals.

Walmart representatives did not attend the meeting, leaving stones thrown by politicians unmatched.

“Walmart’s absence and refusal to attend only leads me to further skepticism about them as a company,” said City Council Speaker Christine Quinn, according to the Wall Street Journal.

Public Advocate Bill de Blasio echoed Quinn’s complaints and added, “Walmart’s record is clear: they have eliminated more jobs than they created by driving small businesses out of town and they are contributing to the decline of the middle class by instituting poverty level wages for familes. What’s good for Walmart isn’t good for New York City.”

Critics of Walmart claim the chain hurts small businesses. In 2009, the Center for Urban Research and Learning at Loyola Uni- versity of Chicago studied the effects of a Walmart opening in Chicago. The researchers found the store cost the neighborhood 300 jobs and no economic benefits were found.

“These estimates support the contention that large-city Walmarts absorb retail sales from other city stores without significantly expanding the market,” the report stated.

Walmart sent a letter to the Council about their absence: “Since we have not announced a store for New York City, I respectfully suggest the committee first conduct a thoughtful examination of the existing impact of large grocers and retailers on small businesses in New York City before embarking on a hypothetical exercise.”

Walmart executives contend that the Council is holding them to a different standard from other big box retailers such as Target and Costco.

The company has started an extensive public relations campaign stating their case. A poll conducted by Douglas E. Schoen, LLC showed that 71% of New Yorkers support a Walmart within the city. The company has also ramped up television and radio ads, and it launched a website, WalmartNYC.com, to publicize the benefits of a store in the city.

Included on the site are endorsements from many political figures, including Mayor Michael Bloomberg.

“You should let the marketplace decide,” Bloomberg said. “[Anytime anyone] has tried to manage the marketplace, it has not turned out very well. I think the Soviet Union is as good an example as you’d ever need of that.”

Another endorsement from Eduardo Giraldo, vice president of the Queens Hispanic Chamber of Commerce, states “You’ve got Duane Reade, Costco, Target, CVS, T.J. Maxx, Staples. ... If Walmart wants to move in, let it compete. This is America. It’s a free enterprise.”

Locally, Councilmember Eric Ulrich (R- Ozone Park) has said Walmart deserves to be in the city.
“Walmart wants to come here and provide union construction jobs and permanent positions that offer pay wages equal to or higher than many of their competitors, and allow people to save substantially on their grocery bills,” Ulrich said. “Why should my constituents—many of whom are on fixed incomes—pay more for a gallon of milk or a loaf of bread? It’s not the job of politicians or special interest groups, especially in today’s economy, to block economic development.”

Still, some believe economic development seems unlikely if a Walmart opened its doors in the city.

“Small businesses in my neighborhood would be in a lot of trouble if Walmart moved in,” said Nelson Eusabio, owner of Compare Supermarkets, which operates several stores in Queens including one on Liberty Avenue. “Walmart would lead to more shuttered stores and fewer job opportunities. That’s a price New Yorkers can’t afford.”
Posted by The Forum Newsgroup at 11:56 AM