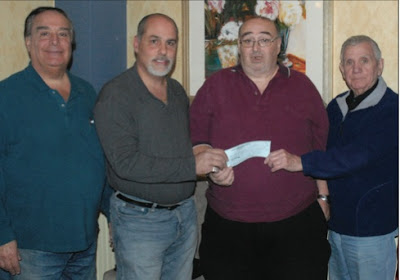 Howard Beach Kiwanis members present Nick Beneduce with a check in memory of his son Jonathan Joseph Beneduce, who was killed in New Jersey in February 2010. At his father’s request, the check was made out to Jonathan’s favorite charity, Birthright Israel.

Nick has also received checks from other friends and family in memory of Jonathan and is asking anyone who would like to help keep his son’s memory alive to make a check out to Birthright Israel and mail to Nick Beneduce, P.O. Box 140082, Howard Beach, NY 11414.

Nick will be presenting checks on the one year anniversary of his son's death.
Posted by The Forum Newsgroup at 12:09 PM