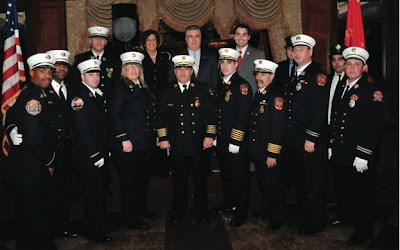 Officers were sworn in last Thursday evening at the West Hamilton Volunteer Fire and Ambulance Corps' 83rd Annual Installation at Russo’s on the Bay. One of the evenings honorees was community resident Tina Palmiotto, who lost her 16-year-old son John in a car crash in November 2005.

Tina created a scholarship fund in her son’s memory at the Robert F. Wagner Junior Secondary School in Long Island City, where John was a student. Over the last three years the fund has awarded more than $15,000 to students who are deemed “most improved” from grades 9-12. Now, because of the suc- cess of the program, it will become available in other schools as well. “John would have been so happy to see this,” said Tina. “These kids are so thankful for the chance the scholarship gives them.

Councilman Eric Ulrich was sworn in as an honorary fire marshal at the event and was presented with a plaque and a West Hamilton Fire Department jacket.

No one would argue that one of the evening’s highlights came with the installation of Joseph M. Vasquezaldana as Chief of the Department. The sixyear member was sworn in by a former department chief, twenty-seven year member Joseph Vasquezaldana—his father. The very emotional moment represented the first time in department history that a father and son have both served as chief.

Speakers at the event relayed the immediate need to raise money for a new ambulance. Following the most recent ice storm on Tuesday night, February 2, the corps responded to a two-vehicle accident on the Belt Parkway. Upon arrival, two members of the corps got out of the ambulance to assist when they noticed a car bearing down on the ambulance.

Both members were struck by the front of the ambulance when the out-of-control vehicle slammed into the back of the unit.

The department has two ambulances, one from 1995 that is regularly used for night calls, and the newer one, which is a 2008. Unfortunately, the older unit was in the repair shop and the newer ambulance was left with serious damage. According to department officials, it will cost $125,000 for a new ambulance.

Rising to the occasion, long-time benefactor of the department, attorney D. Marjorie Centrone, punctuated her speech with the presentation of a personal check for $5,000 to start off the new ambulance fund.

Centrone not only wrote a personal check for $5,000, she vowed to help the department raise the rest of the funds. Within minutes after the announcement that the fund had officially begun, Pastor Baum of St. Barnabas Church in Howard Beach approached Marge and passed along a handwritten note promising yet another $5,000 from the church.

Please check for future updates in The Forum as to how you can help with the ambulance fund.
Posted by The Forum Newsgroup at 12:11 PM