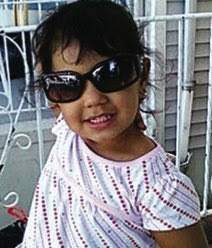 A 2-year-old girl was seriously injured Friday night when she wandered out of her house on 85th street and walked into traffic on Rockaway Boulevard around 9:30. A hit and run driver apparently struck toddler Jaylein Peralta while her relatives were eating dinner and were unaware that the girl had slipped out of the house.

But neighbors say it was not unusual for the child to be wandering around alone. Ravi Persaud said he had seen the child on several occasions walking around by herself. “I am surprised she was not hit before this. I almost hit her myself a few times.”

Another neighbor, Liz Laureano said she also had seen the child walking around alone. The last time was about a month ago. “She was just out here, by herself. She had no shoes on and was wearing just a nightshirt,” said Laureano. “You can’t leave your baby like that. This is what happens.”

But Peralta’s family maintains that this had never happened before and that she just slipped out without their notice. An aunt, who was in the house preparing tacos told reporters that the girl ran out into the street in a heartbeat.

Jaylein’s 20-year-old mother Jeanette works at a supermarket a couple of blocks away from where the incident happened. She was on her way home when she saw the police activity on the street. Relatives said that she had no idea it was her daughter when she happened upon the scene.

When she realized it was Jaylein she picked up the child whom witnesses say just kept saying “Momma, Momma,’ over and over. The child, whose face was covered with blood, was rushed to Jamaica Hospital in critical condition.

As of Saturday she was upgraded at the hospital and is expected to make a recovery. Police have not made an arrest and have no description of the car or its driver.
Posted by The Forum Newsgroup at 2:35 PM