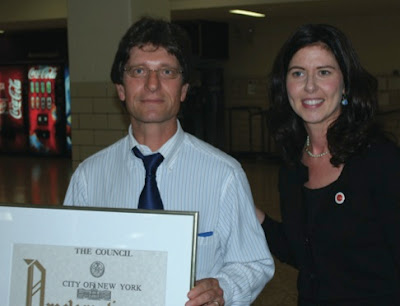 Lifelong Queens resident Gary Giordano was honored for twenty years of service as Community Board 5 district manager with a proclamation presented by Councilwoman Elizabeth Crowley at last week’s monthly meeting.

Giordano, who was born in Maspeth and attended Our Lady of Hope and St. Francis Prep schools, served as a board member for eight years before accepting the district manager position in 1989. He previously served four years as executive director of the Greater Ridgewood Youth Council, was among the founding members of the former Ridgewood Civilian Observation Patrol and dedicated time to the Martin J. Knorr Caregivers Center. In addition to his duties with CB 5, Giordano currently serves as a board member of The Salvation Army, volunteers with the Ridgewood Citadel Corps and is treasurer of the Greater Ridgewood Restoration Corps.

“Mr. Giordano, understanding the sophisticated nature of modern political structure, relies on his aptitude for listening, prefers discussion before decision and calm in the face of a challenge; and conducts the residents’ concerns… with reason and true consideration for the integrated whole of human needs and values,” states the proclamation. “Mr. Giordano faithfully executes the varied and numerous tasks of District Manager, giving evidence of his competency to manage, mediate and advocate, implementing the procedures and personally proving to be instrumental in raising the quality of life in Community Board 5…”

While he didn’t make any comments at the meeting, Giordano told the Forum that things have come a long way since he became district manager, and credited the people he has worked with for helping improve the community. “Portions of it have been a very rough road. When I started, crime was at its height, illegal dumping was a big, big problem, and so was graffiti,” he said. “I certainly had a lot of support from board members… so the board has been very good to me. But it has not been an easy road."

The biggest change over the past two decades, “is how crowded it’s gotten, and how much more competitive life has become,” said Giordano. “It seems to be a faster pace than ever, and I think we need to do our best so that it doesn’t become survival of the fittest so to speak.” Still, he has no regrets regarding the board’s influence on the community on his watch. “Our neighborhood is in great shape, in better shape than I can remember… and by no means is that all my doing.”
Posted by The Forum Newsgroup at 2:30 PM