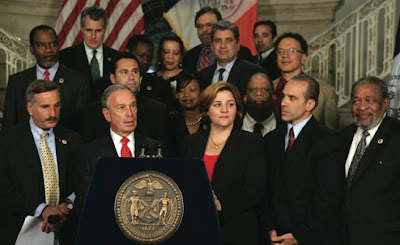 Mayor Michael Bloomberg and the City Council have reached a handshake agreement on a $59.4 billion city budget that avoids cuts to libraries and firehouses, but includes a sales tax increase and repeals the sales tax exemption for clothing over $110.

The spending plan, which covers fiscal year 2010, includes more than $3 billion in spending cuts. It also features a half a percentage point increase in sales tax, expected to generate an additional $518 million. While clothing less than $110 remains exempted from the sales tax repeal, reinstatement of the tax on items above $110 is expected to generate $119 million. The city is facing a $5 billion reduction in tax revenues due to the economic meltdown.

City Council is expected to vote on the budget this week. However, the negotiations essentially came to an end Monday, when the Council voted 38 to 10 on resolutions implementing the sales tax increase and other measures. While the mayor and council reached the agreement weeks before the July 1 deadline, the proposed tax increases must also be approved by the State Legislature.

“By saving billions during the good times, and cutting expenses when the first storm clouds gathered, we were as prepared as possible for the serious impacts of the national economic downturn,” said Bloomberg. “Just like any family that is tightening their belt during these tough times, we are reducing city spending while still protecting the core services that so many New Yorkers rely on – and that keep our city so strong.”

City Council Speaker Christine Quinn (D-Manhattan) said the agreement will “balance the budget during one of the most tumultuous economic times in recent memory.” At a press conference announcing the deal, she added, “Even in a recession, government’s job is to protect and support New Yorkers.”

“It’s absurd,” said Ulrich, who called it a case of “robbing Peter to pay Paul… The last thing we should be doing is hitting people when they’re struggling,” he said. “It’s an aggressive tax on hard working middle and working class people and it’s wrong.”

Crowley said the sales tax increase is “an additional burden on an overtaxed population.” Instead of balancing the budget by raising taxes, “we must come up with alternative sources… rather than punishing our workers and our middle-class residents.”

In a statement, Katz said the increase “will disproportionately burden middle-class New Yorkers who are struggling under the weight of high unemployment, decreasing home values and diminished savings in a time of economic uncertainty.”

Both Ulrich and Crowley called on the State Legislature to reinstate the commuter tax, which was abolished in 1999. “Bringing back the commuter tax would have been a more appropriate relief for our already overtaxed city residents,” said Crowley. However, according to Ulrich, Mayor Bloomberg and Quinn made it clear that revisiting the commuter tax “is not an option.”

In his executive budget released earlier this year, the mayor had threatened to close 16 firehouses, layoff hundreds of ACS workers, cut back on the number of days library branches are open and reduce the city work force by as much as 13,000. He also pushed for a five-cent tax on plastic bags and to eliminate the tax exemption on clothing under $110. However, Quinn argued that those taxes would disproportionably impact low income residents. Still, about 2,000 jobs will be eliminated under the plan.

Crowley, who attended several rallies in support of keeping the firehouses and libraries open, said she is pleased that “our fire protection will not be compromised and that we have won this fight… During this brutal economic time, it has been up to the people and their elected representatives to fight for what matters… We organized, we rallied and we made [it] loud and clear that we would not support a plan that would jeopardize our community’s safety,” she said in a statement.

However, while many officials and residents are breathing a sigh of relief that critical services avoided the chopping block, there is a chance the budget could be amended if the economy continues to falter. At a press conference inside City Hall on Monday, Mayor Bloomberg advised, “If our economy continues to stall, this may not be the last word on this year’s budget.”

This year’s budget negotiations between the mayor and council were largely absent of the public fighting and dissent seen in recent years. The main battles were over the plastic bag fee, which the Council fought against, and the sales tax increase, which drew criticism from some representatives, especially within the outer-boroughs. “It was done responsibly, and it was done without acrimony,” Mayor Bloomberg at a press conference.

However, the drama may be just beginning, since the new tax proposals and increases require approval by the State Legislature. “Balancing this budget required everyone to be a part of the solution, and now the only remaining piece of the puzzle is getting cooperation from the state,” said Bloomberg. “It is imperative that our leaders in Albany come to an agreement to pass a bill that will allow this budget to go into effect.”
Posted by The Forum Newsgroup at 3:00 PM