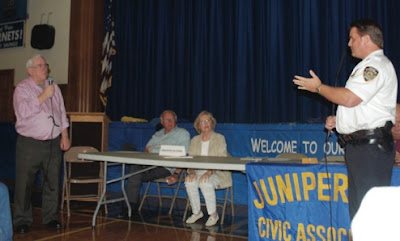 At this month’s COP 104 meeting, held during last Thursday’s Juniper Valley Park Association meeting, residents received an update on area crime, including vandalism in Juniper Valley Park. Several took the opportunity to complain that the precinct isn’t responsive to their calls for help, with officers often taking hours to arrive on scene.

Civic President Robert Holden noted that “it’s been a rough summer [in terms of crime], especially in Juniper Valley Park and with some burglaries and robberies in the neighborhood.” Recently, somebody cut down a dozen newly-planted trees in the park using a saw; a $3,500 reward has been offered for information leading to a conviction.

Captain Ray DeWitt, who joined the precinct five months ago after serving with the 110th Precinct, reported that major crime is down seven percent so far this year compared with the same time last year. That number represents a decrease of more than 100 incidents, while at the same time arrests are up 11 percent. “We’re seeing a significant increase in bad guys going to a jail,” he said.

Regarding the park vandalism, Captain DeWitt said the precinct “has some leads” and is “actively investigating” the recent incident. “We hope to come to a positive end with this,” he added. The reward for information leading to a conviction is being offered by the civic group, Councilwoman Elizabeth Crowley (D-Middle Village), former Councilman Thomas Ognibene and Dan Austin, president of All Faiths Cemetery.

Holden, who thinks the vandalism was caused by individuals who had been kicked out of the park after it had closed on a recent night, is calling for strict enforcement of the 9 p.m. curfew to “keep some control of the park and stop some of the vandalism from happening,” which tends to occur at night.

Sgt. Lily Austin of the Parks Enforcement Patrol suggested the community volunteers form a citizens patrol group that can help keep an eye out for illegal activity in the park. “We don’t need you to intercede, but when people see that people are taking their community back” it helps prevent future crimes. “We need you to get involved and be the eyes and ears… Pay attention to things that don’t look right,” she stressed.

Holden said that with 1,650 families, the JPCA should have no problem getting volunteers. “We’ve gotten a lot of attention [on the incident] but as soon as that dies down it’s going to happen again. We want to catch these guys,” he said.

Several residents complained to the captain that they had a hard time following up on prior incidents or that it takes a very long time for officers to respond to calls.

One said that he had filed a complaint against his neighbor, but was told when he called for the case number that the officer handling that case was on vacation. When he called back, he was told the paperwork had been lost. Another said that it took more than three hours for officers to respond to a car accident his wife was involved in on Caldwell Avenue. It happened at 1 p.m. on a recent Saturday, but by 4 p.m. both parties agreed to leave the scene because officers had yet to arrive. He was later told the officers arrived twenty minutes later, with the delay blamed on the fact that the precinct only had two cars on patrol at the time. The resident called the response “absurd.”

Captain DeWitt apologized for the situations and promised to follow up with the residents in private. Still, JPCA member Bob Doocey was critical of the precinct’s track record for responding to calls. “The response time of the 104th Precinct is abysmal, and cops don’t get out of their cars and take a report” when they do arrive, he charged.

Another resident asked about the precinct’s police for responding when residential and commercial burglary alarms are set off. She said hers was recently triggered, yet her neighbor told her that officers didn’t response in a timely fashion. Captain DeWitt explained that these calls aren’t prioritized as high as specific reports of crimes in progress, but agreed that her situation “seems to be an issue.”

Finally, a resident questioned the precinct’s response to 311 complaints. He said he registered a number of complaints about commercial vehicles parked overnight on city streets. However, in several instances, the precinct reported that the problem had been rectified just 15 minutes after it was logged – barely enough time to even reach the scene.

A civic member warned the audience that there have been a number of residential burglaries in the area surrounding Our Lady of Hope, located at Eliot Avenue and 71st Street. In one case, the widow of a deceased police officer was targeted, with “a lot of stuff” taken, the resident reported. He said that in several cases, the perps gained entry by pushing in air conditioner units. “Somebody’s working the area,” he warned.

Holden added that there seems to be a team working the area near Juniper Valley Park, with one person ringing the doorbell while another enters through the rear of the house. He said the incidents have spilled over to the area north of Eliot Avenue in Maspeth.
Posted by The Forum Newsgroup at 2:20 PM