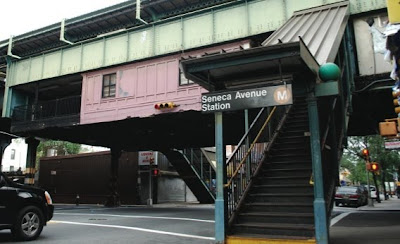 Ridgewood now has a new claim to fame: the neighborhood is home to the subway station deemed most in need of repairs by the city MTA. In addition, a number of stations along several lines in south Queens received poor scores in a recent MTA survey assessing conditions of stations citywide.

The survey found that the Seneca Avenue stop on the M Line ranked highest in terms of problems such as rust, peeling paint and crumbling concrete. Each of the city’s 468 stations were graded one a scale of one to five (with five being the worst) on the condition of its interior and street stairs; platform walls, floors, ceilings and edges; platform columns and other support spans along with other categories.

Using those results, each station was ranked based on the percentage of components rated 3.5 or higher. The Seneca Ave. station received a score of 86%, and several other stations along the line didn’t fare much better. The Central Avenue stop was graded at 76%, slightly worse than the Forest Avenue stop, which received 73%. The Fresh Pond Road station was graded at 64%, while the Knickerbocker Avenue stop – which is in Brooklyn - fared better at 45%.

While other stations around the city might seem grimier or more in need of attention, the survey – conducted for MTA NYC Transit by an independent firm – looked at areas such as the structural integrity of stairs, walls and platforms. The 50 stations with the highest percentage of problem categories were placed on a list of priorities for the agency’s Station Renewal Program. Half the stations, which have yet to be identified, will receive an average of $10 million in repairs and upgrades over the next five years.

In addition, the MTA’s 2010-14 capital plan includes funding for 14 major station renovations. The long term goal is to eliminate all components rated 3.5 or worse within 15 years, at which point the agency would “maintain a state of good repair at all NYCT stations.”

Councilman Eric Ulrich (R-Ozone Park), who rides the A Train to City Hall on a regular basis, said "it's no suprise that some of the subway stations in this part of Queens have ranked among the worst in the city. The people who ride these trains everyday, myself included, have known this for years."

He said he has been "aggressively pushing the MTA to invest capital money to improve the structural integerty and phyisical appearance of some of these stations... Certainly when a station is in disrepair and covered with graffiti and garbage, people are going to get a false impression that the community is one the decline," he said. "These are very visible sights of a community, and for some people the only exposure to the area they have."
Posted by The Forum Newsgroup at 2:40 PM