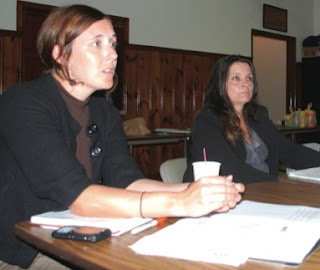 Quality of life issues were again on the minds of residents during this month’s Maspeth West End Block Association meeting, with gripes ranging from a lack of police presence that has led to teenagers congregating in the area to traffic issues outside a local school.

The meeting, held September 17, was dominated by complaints that residents blame on the lack of police patrols through the neighborhood by officers from the 104th Precinct. Civic President Kathy Hamilton was unable to get precinct officials to attend the meeting, but said some progress was made during a recent meeting with Deputy Inspector Keith Green, the precinct’s commanding officer. “It’s just not enough,” she said of the minimal patrols that resulted. “I guess we need to make some more noise.”

One neighbor complained of “gangs” of teenagers that come to the area to drink beer and smoke pot on the street corners. She described them as “very nasty” and said her property was vandalized after she asked them to move along from in front of her house. One told her they live in Ridgewood, and residents are worried that the area will attract more teens from out of the neighborhood because there is little police presence in the area.

Hamilton and Jennifer Manley of the mayor’s Community Affairs Unit stressed that residents should call 911 immediately if they see a crime in progress. Manley added that steps can be taken against a nearby deli residents say is selling beer to underage individuals.

Other complaints included issues stemming from dismissal from PS 153 on 60th Lane, which residents said becomes impassable due to double parked cars. “You can’t go to the stores between 8 a.m. and 3:30 p.m. if you want to be able to park near your house,” the residents said. “It’s non-stop horn blowing… The parking is absurd.”

“It’s not the kids and it’s not the school – it’s the people who are in charge of them” whoare to blame, added resident Ann Murphy. She called the situation a “disaster waiting to happen” that has been a problem for about a decade.

Manley said the problem of parents double parking near schools is a “chronic issue across the borough and said there is a Department of Transportation program aimed at reminding parents not to do so. “It is a traffic enforcement issue,” she said, suggesting the issue be raised at a community board meeting. “Asking nicely doesn’t seem to be working, so maybe some tickets would be helpful,” she added.

Another topic of concern for residents was a violent mugging that took place on 62nd Avenue near 60th Street several Fridays ago. A resident heard a girl scream and came out to find her bleeding from her head. According to neighbors, a group of Hispanic men approached the couple and asked if they had any money. When they said they didn’t, the men started beating them before jumping into a black car. “It was a gang that just came down our block and mugged those kids,” said one resident. “There was blood all over.”

Other topics of discussion included ongoing parking and other problems in the area of the Met Oval soccer complex and drug-related activity in Moonlight Bar. In addition, residents expressed concern over the future of a property on 56th Street that is currently home to a lumber company. The company seems to be in the process of vacating the property, and a concrete wall was recently built. As a result, “everyone is speculating about what is happening back there,” one resident said, adding that the concern is that residential units will be constructed there. “Nobody knows what is happening, but something is happening,” the resident added.

Editor’s Note: The meeting also included a detailed discussion on the effort to attract a supermarket west Maspeth, as reported in last week’s Forum West. That story can be read online at theforumnewsgroup.com.
Posted by The Forum Newsgroup at 1:50 PM