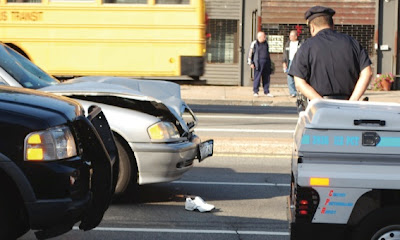 A 32-year-old woman was struck by a car and killed while trying to cross Woodhaven Boulevard on Tuesday morning in Rego Park.

The woman, who has not been identified by police, was attempting to cross the busy stretch of road between 62nd Drive and 63rd Avenue – about a half mile south of the Long Island Expressway – at about 6:30 a.m., according to police. She was crossing mid-block and was pronounced dead at the scene.

Several hours later, the woman remained in the left lane of the boulevard’s northbound side, covered with a white sheet. She had landed about eight feet in front of the 2000 Mercedes Benz, and one of her shoes, which had been knocked off by the impact, sat beneath the car’s crumpled front end. Police say the driver remained at the scene and is not expected to be charged. Traffic backed up as the boulevard’s northbound lanes remained closed hours after the accident.

The accident comes as the city is studying ways to make the boulevard safer for drivers and pedestrians. Several residents at the scene said that drivers speed up as they near the expressway and rush to beat traffic lights.
Posted by The Forum Newsgroup at 3:30 PM