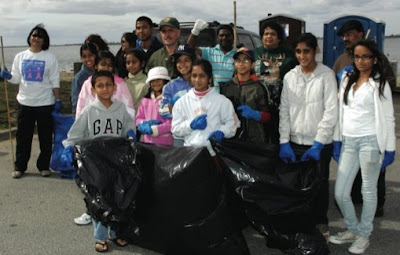 The annual International Coastal Cleanup is the largest volunteer day of its kind. Last year 400,000 volunteers in 100 countries and 42 US states collected more than 6.8 million pounds of trash. With each year, organizers hope to see increases in both the number of volunteers and the amounts of trash collected.

The international event is held each year on a Saturday in late September and this year a cleanup of the North Channel Bridge, separating Howard Beach and Broad Channel, was the local event in our area. The American ittoral Society was one of the organizations working with the National Parks Service and the organizers of the Coastal Cleanup, to make sure the areas surrounding the bridge were successfully cleaned.

Just as important as removing the trash, volunteers are encouraged to look for the source of the debris, and help think of solutions to help people change the behaviors that create the trash in the first place. Avoiding the pollution is infinitely preferable to cleaning it up!

Volunteers turned out in full force with the tally reaching 127 people all of whom collected 275 bags of trash. Councilman Eric Ulrich was on hand to observe the efforts of the beach cleaners. “I am so impressed, not only with the amazing job that was done here today, but more so by the spirit of the volunteers who made this happen,” said Ulrich.

The Jamaica Bay area is historically a problem tract and the area around the North Channel Bridge has been the seat of much controversy and frustration within the local community because of the continued dumping of garbage and religious rituals that leave the beaches littered with silk fabric, coconuts and other fruits.

Community residents and volunteers were impressed to see the efforts of the more than 50 volunteers who came down to the cleanup from the United Federation of Hindu Mandirs. Leaders in the Hindu community have expressed their desires to help educate people about carrying on religious practices without having negative environmental impact and were instrumental in the success of the beach clean-up.

If you would like to learn more about the International Coastal Clean-Up, you can visit the Ocean Conservancy website at signuptocleanup.org
Posted by The Forum Newsgroup at 2:50 PM