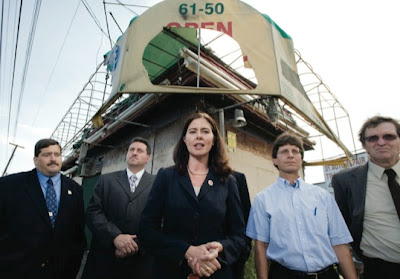 The intersection of Metropolitan Avenue and Fresh Pond Road – where Maspeth, Middle Village and Ridgewood meet – is currently dominated by a rundown newsstand on land owned by the LIRR, and local officials are hoping to turn the property into a greenspace.

Councilwoman Elizabeth Crowley (D-Middle Village) was joined at the site last Thursday by State Senator Joseph Addabbo (D-Ozone Park), Assemblyman Mike Miller (D-Glendale) and community leaders to call on the LIRR to turn the land over to the community until it’s needed for a long-delayed bridge replacement project.

“While we continue to wait for the MTA to finally develop this area, we should be granted the opportunity to beautify this property in the meantime,” said Crowley. “The thousands of Queens residents who pass daily through this intersection have had to look at the dilapidated condition of this property for over a decade. This long-time eyesore hurts the surrounding businesses and stifles the area’s economic growth.” 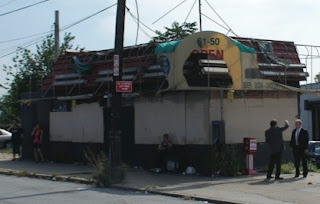 Under Crowley’s plan, the LIRR would simply give the community approval to knock down the building, clear the site and plant a community greenspace. She estimated the project would cost about $10,000 and could be covered by donations and community volunteers. “This is a reasonably achievable prolocalposal that will benefit the area drastically,” she said.

The proposal was also supported by Addabbo, who said, “This property means very little to them but a lot to our community.” He said upgrades to the area would benefit the community both in terms of aesthetics and economically, as it will become more inviting to shoppers. “This is a blight. It’s unfair to the residents to face this everyday.

Local Democratic District Leader Tom Bornemann said the current situation has existed for about a decade, during which time several former Republican council members failed to address it. “This was brought to the councilman [at the time] eight years ago and nothing has been done until now,” he said.

Also on hand to support the project was Community Board 5 District Manager Gary Giordano – who noted the $30 million bridge replacement project was supposed to begin in 2004 – and Ted Renz of the Ridgewood Local Development Corp – who recalled that the intersection was formerly home to a train station. “This should be another transportation hub in the future,” said Renz. Assemblywoman Cathy Nolan (D-Ridgewood) also supports the initiative but was unable to attend the press conference.

A city Department of Transportation spokesman was unable to say when the bridge replacement project will take place. However, the department will continue to work with the MTA and LIRR to determine the project’s scope and timing for maintaining the bridge while meeting the needs of the community, the railway and its customers, according to the spokesman.

Crowley said the focus is now on cleaning up the former newsstand property, but noted that a former service station across the street is also owned by the LIRR. “We’ll do this one first and that property will be our second request,” she said.

“They need to take care of the local community, and all it would take is the flick of a pen,” added Miller.
Posted by The Forum Newsgroup at 3:20 PM