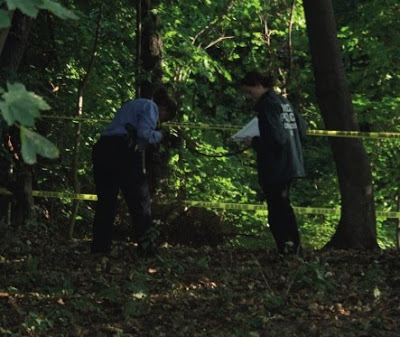 In the third sexual attack in Forest Park since the start of summer, a 29-year-old female was raped early last Thursday morning. The victim, a student teacher at a Cambria Heights school, was on her way home sometime after 2 a.m. Authorities say she was returning from a late night appointment with her hairdresser.

After getting off the J train at the Woodhaven Boulevard and Jamaica Avenue station, the woman proceeded toward her home on nearby Park Lane South. It is unclear if she made a stop at Dunkin Donuts, as initial reports stated.

Approaching the intersection of Woodhaven Boulevard and Park Lane South, an unidentified black male she described as approximately 6’4”, with a goatee and braided hair accosted the young teacher. In her statements to police the victim stated that her assailant came up from behind, wielding a knife and pressed it to her neck.

Early morning passersby looked to police at the crime scene for answers. “I use the tennis courts here a few mornings a week,” Janice Wasser said. “I will think twice and three times about ever venturing down here on my own now.” Residents continued to express their surprise and alarm as they stared at the yellow police tape and a Crime Scene Investigation vehicle parked alongside the street.

“This is really giving me the creeps,” Michelle said. The mother of two walks her toddlers in a stroller past the scene of the rape every day. “It’s scary to think you can’t walk along the street. You think about it but when you see it right there…you have to remember it. It really scares you.”

Police canvassed the area to determine if anyone witnessed any part of the attack which has been described by sources as brutal.

Television reports on the day of the rape stated that the attacker had apologized to his victim and told her he did not have A.I.D.S. The woman was taken to Queens Hospital Center, one of two Sexual Assault Forensic Examiner (SAFE) Centers of Excellence, where sexual assault victims receive sensitive care within one hour of their arrival.

Earlier this year two women were attacked on the same day, in different locations in Forest Park. Back in June, a young attacker raped one woman less than two hours after having tried to rip off the clothes of another woman who was at the park exercising. The rape victim in those attacks was out for a stroll at 7:45 p.m. that evening.

Police are still vigorously investigating all information in regard to this case. The suspect is still at large.
Posted by The Forum Newsgroup at 3:10 PM