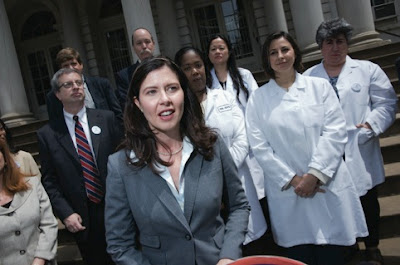 During the rally on the steps of City Hall, Crowley (D-Middle Village) blasted Gov. David Paterson for allowing malpractice insurance rates to skyrocket, which she says has jeopardized healthcare for all female city residents. She will introduce legislation at the next City Council meeting “calling on the State Legislature to address this medical crisis immediately.”

“The current medical malpractice insurance system – which is regulated by our government – is driving doctors out of New York, and the first doctors to go are the ones who provide women’s healthcare,” said Crowley. “New York City is losing obstetricians at a faster rate than in any other area in the country… If we continue in this direction who will care for pregnant women? Who will deliver babies in New York?”

According to Crowley, 28 obstetricians who deliver tens of thousands of babies annually at eight hospitals in Queens, Brooklyn and Manhattan will no longer be able to perform their professional duties as of July 2. In addition, between 2002 and 2008several hundred city doctors changed their insurance coverage, meaning they are no longer covered to perform obstetrics. Many hospitals have also been forced to cease providing obstetric services due to malpractice insurance costs, with 14 city hospitals eliminating their regular obstetrical services between 1995 and 2003.

Dr. David Freidman, a gynecologist in Manhattan, called the issue “a time bomb that is threatening to destroy women’s healthcare” in the state. “Because of the oppressive malpractice insurance rates, I and many others in the state have had to stop delivering babies,” he said. “This trend is sure to continue unless some relief is on the way.”

Crowley argues that it is the state and federal government’s responsibility to intervene and reduce or freeze the malpractice rates so doctors can afford to remain in the city. Through an online petition, a letter to her colleagues and a City Council resolution, she is calling on Gov. Paterson to reduce medical malpractice insurance rates, institute a public malpractice insurance option that will keep our obstetricians and breast imaging doctors in New York City by offering them affordable rates.

The overall problem has been exasperated by the closing of three Queens hospitals in the past six months, said Crowley. In addition, over the past four years three Brooklyn hospitals that delivered thousands of babies a year – Interfaith Medical Center, St. Mary’s and Victory Memorial – have closed their maternity ward.

The top two highest risk areas for malpractice insurance fall under obstetrics, with examinations for breast cancer coming in third. This has caused a shortage of breast radiologists and mammography facilities, creating a backlog for mammograms.

Dr. Jay Tartell, a radiologist at Mt. Sinai in Queens, said his facility has been searching for a breast radiologist for more than a year. “In addition to discouraging radiologists form specializing in breast imaging, the high risk of lawsuits have caused the existing mammographers in our group to become increasingly reluctant to read mammograms<’ he said.

“In Queens, we are all well aware of how much of a challenge access to health care has become, especially when women have to wait up to six months for an appointment to get a mammogram,” said Crowley. “Access to health care for the residents of Queens and Brooklyn is already an alarming challenge. This is why we are out here today calling on the State Legislature to reduce medical malpractice insurance rates and to find an effective solution to this crisis to ensure that there is adequate access to doctors for the women of New York.”

Councilwoman Elizabeth Crowley joins area doctors at a rally calling on the State Legislature to reform the medical malpractice insurance industry to prevent doctors from leaving the city. The Forum Newsgroup/photos courtesy of WILLIAM ALATRISTE
Posted by The Forum Newsgroup at 2:28 PM

This is a major problem in our malpractice system. It is getting to costly for good doctors to practice.