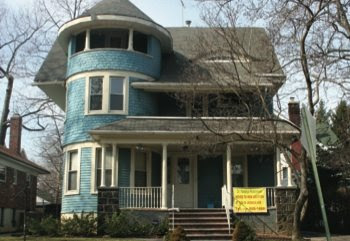 A house on 112th Street in Richmond Hill will likely be used as a group home for blind and retarded teenagers, now that Community Board 9 has backed the proposal by the Association for the Advancement of Blind and Retarded, Inc.

Following a public hearing at its meeting last Tuesday, CB 9 members voted 25-4 to support the proposal, which allows AABR to use a house located at 84-20 112th Street as a residential facility for six boys ages 16 to 18. Voting against the plan were board members Regina Santoro, Sam Esposito, Maria Thompson and Joe Tedisco.

The boys living in the home all suffer from
moderate to severe mental retardation. They have attended the New York Child Learning Institute, which is an AABR-run school in College Point, since they were about three years old. On Saturdays, they attend a recreational program outside the home from 9 a.m. to 4:30 p.m. Most of the children are verbal, although many are shy and quiet.

Residents who spoke at the public hearing had mixed feelings about the home, with some welcoming their new neighbors with open arms while other expressed concerns over safety. Susan Carter said she was “appalled” that a group was circulating a petition opposing the home, which she called a “wonderful opportunity… The presence of this home will not in any way lower our property values.”

Others argued that placement of another group home in the neighborhood would lead to an over-saturation of these facilities in the area. Rebecca Chen said that while she is not opposed to the group home itself, she “opposes the clustering of them,” noting that there already is one within 500 feet of the proposed site. “That in my book is clustering, and I oppose that,” she said.

For Arvin Taveras, who lives next door to the proposed site, the issue is the safety of his children. “You never know what can happen,” he said. “We just don’t feel that the neighborhood should have this kind of clustering of group homes.”

On the other side was Patrick Kearns, who has raised five children in Richmond Hill. He urged neighbors to get to know the group home residents to alleviate concerns. “Get to know who is coming to the neighborhood… There is nothing to fear,” he said, adding that a home run by AABR on 104th Street is the nicest home on the block. “I wholeheartedly welcome AABR to our neighborhood. Our greatest asset in Queens is our diversity, and that includes the mentally challenged.”

Councilwoman Elizabeth Crowley stopped by the meeting after the public hearing, but told the audience that her mother sold her childhood home in Maspeth to a similar group when she was 18. “My mother had a choice – [sell to] a developer or a group,” said Crowley, adding that some of her neighbors weren’t happy with the decision.

Some who spoke against the proposal said they were concerned that the 1890s Queen Ann-style home would be altered. The group’s executive director, Christopher Weldon, assured the board that the “integrity of the home will be maintained.” Interior work will include bathroom, kitchen and basement renovations, and the exterior of the home will remain the same with the exception of new landscaping.

While the community board acts solely in an advisory role, its members had three options: approve the plan, suggest alternate sites or reject it on the grounds that the area is over-saturated. If the board denied the plan, the group would have had the opportunity to appeal that decision.
Posted by The Forum Newsgroup at 2:45 PM