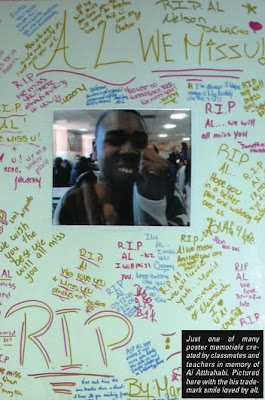 REMEMBERED BY ALL AT MS 210

Please note that those quoted in this story are not named due to a regulation “gag order” from the school administration.

Although his life ended in the span of just a few minutes, the impression that 13-year-old Alhaarith Atthahabi left on everyone he touched was one of gentleness and warmth. It is an impression that will stay with his teachers and friends for the rest of their lives.

He was known for his ever-present smile. In fact, the smile was the only thing that seemed larger, next to his huge, almost six-foot frame.

Eighth-grader Alhaarith Atthahabi was known by his teachers at MS 210 as a gentle giant. A student who got consistently good grades, ranging from high 80’s to 90’s. A typical boy who was very smart but who sometimes wanted to do what he liked best — play basketball.

Teachers, who spoke off the record, said there was only one complaint about the student they affectionately named Big Al—his other name was the “Gum Guru”. Any of Al’s classmates, who were in search of a piece of prohibited gum, knew where they could find it. Al always had a plentiful supply that could be seen tucked away in the corners of his mouth when he flashed that big smile.

Al loved basketball, talked about going to college and was adored by his classmates. One teacher said, “It’s very unusual when a student is liked by all of his school mates. Of course he was closer to some than others, a product of all relationships forged, but in Al’s case, everyone just adored him.

Whether it came from teachers, students or subsidiary staff at MS 210, everything spoken about Al echoed the same words —a quiet, gentle boy, an ever- present smile and that undeniable passion for basketball. “It is so ironic that this tragedy happened on the basketball court,” said one of Al’s teachers. The tears collected in her eyes were unmistakable as she continued, “I can’t even imagine that this has happened, but knowing Al, if it had to happen anyplace, he would have been happiest leaving from the basketball court.”

On Wednesday afternoon, shortly before 3:30, Al was shooting hoops on one of the outside courts with his friend Mark. Inside the school, Al’s mother, Aaishah Francis, was there to pick up her three children from school. Everything happened so fast according to the account of Al’s friend. “We finished playing. “We were getting ready to go home. Al put his foot on the basketball and clenched his chest. Then he just went down. Al’s little brother was there in the schoolyard with him. “Al get up. Get up.” His brother thought Al was just playing around.

But Al was not playing a practical joke. He lay on the court in cardiac arrest, his distraught mother over him. A teacher walking to her car saw what was going on and ran to check for a pulse. There was none. An assistant principal raced to Al’s side and began to administer CPR. But the boy was non-responsive. Staff inside the building said they heard a very distinct moaning, mournful wailing, coming from outside. They figured it was some of the kids playing around.

“No one thought that this harrowing sound was coming from the mother of one of our kids. It’s just not where your mind goes. Your mind never wants to go there.” Teachers say that because of the school’s proximity to Woodhaven Boulevard, the sound of sirens and emergency vehicles is commonplace.

Al did not respond to resuscitation efforts by FDNY or EMS personnel at the scene who used basic and advanced life saving and support equipment in hopes of restarting his heart. And on the day before his 14th birthday, Alhaarith Atthahabi, with no medical history of heart problems or any other health conditions, died next to his mother and on the beloved basketball court that was at the center of his universe.

Al was buried on Friday in a quiet Muslim ceremony and on Monday students and teachers spent their day remembering Al by beginning a series of bulletin boards with pictures and letters and thoughts of Al written by his classmates.
Posted by The Forum Newsgroup at 3:20 PM

this articale had me haeartbroken, i actaully knew him :'( its only been a month. his friend Marc (not marK) is still heartbroken =\