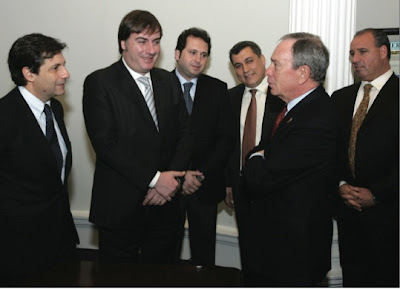 PLEDGES SUPPORT TO RELAY FOR LIFE

A packed crowd joined the regular Foundation membership to welcome the president of the Province of Palermo, Giovanni Avanti. At the meeting Mr. Avanti was asked to act as the 2009 Italian International Dignitary at the Foundation’s Columbus Day parade and Gala Dinner in October.

President Avanti has accepted the offer and says he has plans to work with the Foundation on many projects in the future. “It is very important that you continue your work to weave the Italian-American cultures together,” said Avanti.

He informed the audience that his visit included discussions with the Foundation board members to facilitate the implementation of a language study exchange program between American and Italian students.

“The fact that we are so privleged to be joined by such a distinguished member of the Italian government is a great honor,” said Mario Faulisi, the Foundation’s president. “But what is really important is that there is a clear understanding that we are all interested and committed to the development of our cultural integration. Education and language is central to our cause and we welcome the help we will be receiving from abroad."

Later in the evening, it was Faulisi himself that was honored with the announcement that the Howard Beach Columbus Day Foundation is planning on taking a lead role to help the American Cancer Society in their Relay for Life Event beginning on Saturday June 13. The Foundation has committed to raising funds in Faulisi’s honor as a cancer survivor after his recent battle with an aggressive form of lymphoma.

“The opportunity for our Foundation to help give back something to people who fight cancer every day is something that we can never express,” said Angelo Gurino. “Mario is not only a cancer survivor, he is an inspiration to everyone with the disease that you can fight this battle and win. We hope we can help the American Cancer Society with their work so that every year the number of survivors and champions, like Mario, will grow."

Photo: The president of Province of Palermo region was greeted at City Hall by Mayor Bloomberg on his recent visit to New York. His visit to meet the mayor was facilitated by Councilman Eric Ulrich. Pictured from l to r: President Giovanni Avanti, DOT Commssioner Palmero Giovanni Tomasino, Mario Faulisi, president of the Howard Beach Columbus Day Foundation and Foundation treasurer, Angelo Gurino.
Posted by The Forum Newsgroup at 2:50 PM