Ulrich Sworn in by Mayor Bloomberg 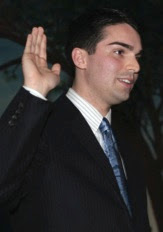 Councilman-Elect Eric Ulrich was administered his oath of office last Sunday by Mayor Michael Bloomberg at a ceremonial swearing in held in the auditorium of P.S. 207.

In his remarks the Mayor said, “We're going to work together in this city. One of the things that Eric is going to find out is that while sometimes you read about all the differences between one party and another, at a city level, everybody works together. There are Republicans, Conservatives, Democrats, Liberals, Working Families Parties, and Communist Party for all I know. From every party in the world, they live in this city, they work in this city, and some of them work for the city. But one thing is for sure, they do work together. And that's what makes this place the greatest city in the world.”

Ulrich, who was elected to fill the position vacated by State Senator Joe Addabbo in the February 23rd Special Election, was sworn in officially by the City Clerk March 18th following the certification of the election results on March 17th.

Those results show that Ulrich won the election with 3549 (44.5%) of the votes of the 8,030 voters who showed up to cast their ballots. Although not unusual in a special election, only 10% of the Council District's approximately 80,000 registered voters cast a ballot in the election to fill the City Council seat. The other 90% stayed home.

The segment of the district that saw the largest turnout was that part that lies within the 23rd Assembly District where three of the four candidates, Ulrich, Lew Simon, and Geraldine Chapey, who ended up on the ballot serve as District Leaders for their respective parties. A fourth 23rd AD District Leader, Frank Gulluscio was in the race until being knocked off the ballot. In the 23rd Assembly District 13% of the registered voters took the time to cast a ballot.

Councilman Ulrich must run again in the fall for a full Council term. Mayor Bloomberg offered up some advice for the second youngest person ever elected to the New York City Council. “If you march in Rockaway in the St. Patrick’s Day after doing something controversial, expect a lot of one finger waves. Make sure you attend all of the stated city council meetings; I don’t know if the Speaker keeps an attendance record, but I can tell you that the New York Post does.” Most importantly, Bloomberg explained to Ulrich, was that if he wanted a long and successful career in government, “Don’t ever vote against a bill introduced by the mayor’s office.” Before swearing in the Councilman elect, Bloomberg quipped that he hoped to do a better job than Justice John Roberts.

Ulrich thanked the attendees, the mayor, his family and all those who he says helped him get elected. “I said I would represent this district with honor and integrity and that is the only promise I will make. There were many obstacles in the way and people who said this couldn’t be done.” Ulrich addressed the fact that some people feel his role in politics would be brief. “I’m here to stay, I’m not a benchwarmer.”

On Wednesday, the city clerk officially swore in Ulrich. “I’ve heard among some of my colleagues that I may not be here very long and that I’ll have a tough time getting re-elected.” Ulrich says he can understand those remarks, especially considering Democrats outnumber Republicans by a majority of about 3-to-1 in his council district.

“But I am a person who has been proving people wrong all my life. I was told I would never be the district leader. Then I was told I would never be the city councilman. I still hear that I won by a fluke.” Ulrich says he doesn’t intend to focus on those remarks. “I was officially sworn in today and all I am thinking about is getting my offices open and getting about the business of my constituency. I’m going to do my job in the council now and I hope I’ll be doing it in the future.

Ulrich says that he feels if Mike Bloomberg secures the Republican line, the mayor's position at the top of the ticket will prove a tremendous help to his own re-election bid. “If you look at 2005, the Mayor received over 70% of the votes in our council district. Obviously the new addition to the council is hoping for history to repeat.
Posted by The Forum Newsgroup at 3:10 PM