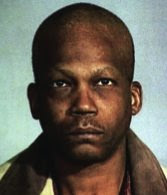 SUSPECT WAS CONVICTED OF BURNING DOWN CHURCH IN 1999

A local homeless man has been sentenced to at least 13 years in prison for assaulting a priest in front of a South Ozone Park church. The attack came eight years after the man was convicted for burning the church to the ground.

Calvin Bostick, 49, was sentenced last Thursday to thirteen-and-a-half years to life in prison by Queens Supreme Court Justice Stephen Knopf. Bostick, who has no known address, had pleaded guilty to second-degree assault in January in connection with the February 23, 2007 attack of Rev. Christopher Ezeoke.

According to the charges, Bostick approached Rev. Ezeoke from behind at St. Anthony of Padua on 128th Street just after 5 p.m. and struck him in the head with a walking cane. Bostick continued to strike the priest on the arms and head with the cane, ultimately pushing him into the rectory, where he continued the assault.

The attack came just 11 days after Bostick was released from prison after serving eight years for burning St. Anthony’s down. Rev. Ezeoke, a native of Nigeria, didn’t recognize Bostick as the arsonist from eight years ago because he was not assigned to the parish at that time. The priest, who at 6-feet-2 had about seven inches on Bostick, was able to hold his attacker until police arrived. Officers also found a crack pipe on Bostick while taking him into custody.

“Today’s sentence is more than warranted. The defendant has a long and violent criminal history, including a conviction for having burned to the ground the very same church eight years earlier,” said Queens District Attorney Richard Brown, who noted that Bostick faces an enhanced penalty of up to life in prison because he is considered a persistent violent offender with at least three previous felony convictions.

In 1999, Bostick was arrested after he confessed to starting the church fire after trying unsuccessfully to panhandle in front of it. The one-story building was severely damaged in the fire, and two firefighters suffered minor injuries battling the blaze. Bostick - who previously set fire to his cell at Rikers Island and has a history of drug convictions – was arrested after returning to the church to claim a reward for reporting the fire to 911. He has been arrested at least 20 times and has served prison time for several previous felonies.
Posted by The Forum Newsgroup at 2:40 PM