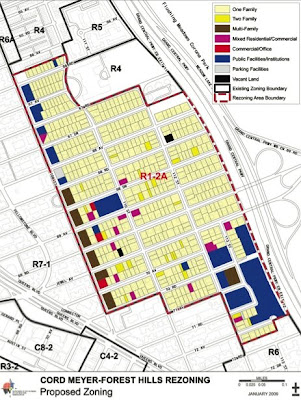 The rezoning of Forest Hills’ Cord Meyer neighborhood – intended to prevent out-of-character McMansions - cleared its first hurdle last week when the local community board overwhelmingly voted in favor of the plan.

Under the city’s proposal, the 32-block area’s zoning would be changed to R1-2A, a new zoning classification that restricts the height of single-family detached houses. The current zoning has been in place since 1961 and lacks a maximum building height, which has led many property owners, including some Bukharian Jews, to replace modest Cape Cod and Tudor style homes with huge houses.

Queens City Planning Director John Young said at last Wednesday’s Community Board 6 meeting that the new zone will provide “predictability” as to what can be built. The area has been under intense development pressure for the past decade, leading to “some concern in the community about scale,” said Young. The new zone will “keep what is good [while] creating a little more predictability.”

The Cord Meyer rezoning area is bounded by 66th Avenue to the north, the Grand Central Parkway to the east, 72nd Road to the south and 108th Street to the west. The majority of the homes were built on large lots between 1910 and 1940, giving the area a low-rise character that is in distinct contract with nearby blocks lined with mid-rise apartment buildings to the south and west, especially near Queens Boulevard.

Under the plan, the R1-2A zone would be implemented, which is similar to an effort underway in North Flushing. The zone would establish a 25-foot maximum perimeter wall height and a 35-foot maximum roof height. Under the existing zoning, building height is based on what is known as the sky exposure plane, which has resulted in houses as tall as 37 feet, according to DCP.

Attorney Albert Dayan spoke on behalf of the Bukharian Jewish community in Forest Hills, some of whom have spent a lot of money to buy large lots with the intention of building a home for several generations of family members.

“It’s not that we’re doing it to show off and display our wealth,” he later said in an interview. “We’re doing it because it is necessary for us to house families that on average have four children and then we have our parents live with us. We happen to be by tradition very humble people taught never to arouse envy, so we don’t do it for those reasons; we do it out of necessity.” Dayan said that the only aspect of the city’s plan his clients object to is the 25 foot maximum perimeter wall height.

“I think it is a fair compromise to say we can limit the building height at 35 feet, that’s fine, but don’t limit the wall to 25,” he said. “Everybody wins, they get their height restrictions and we can get more living space on the third floor.”

Several residents spoke in favor of the proposal at the hearing and said the current construction practices are destroying the neighborhood.

Enid Brownstone wondered why the large families with several generations don’t simply buy several modest houses within the neighborhood instead of paying as much as one million dollars to buy a large lot and tear down the existing house. “There might be some money around to buy some [smaller] homes and not disturb the conformity of our neighborhood,” she said to loud applause. “The zoning is adequate – the problem is, it’s been violated.”

Steve Goodman of the Association of Old Forest Hills stressed that the new regulations are not about keeping any particular group out of the area. “Personally, we welcome people moving in – they are certainly allowed to do that,” he said. “We just ask that they maintain the overall look of the neighborhood.”

However, Dayan said many of his clients only bought land in Cord Meyer because of the existing zoning’s flexibility, and accused the board of moving forward with the rezoning due to negative feelings towards the Bukharian community. “We want to build homes that reflect our tradition… We believe the source of this is negativity,” he said at the meeting.

In the subsequent interview, Dayan said the new zoning “takes away living space from us… without lawful justification.” He said he will discuss the proposal with Queens Borough President Helen Marshall, who reviews the plan now that the community board approved it. “This change is not for the benefit of the community. We are part of the community, but nobody wants to take our concerns into consideration,” he said.

If the City Council eventually adopts the proposal, Dayan said it is likely he will challenge it in court based on the argument that the government can’t take private property without due process. “Like I said, I think they are taking the property away from us without justification.”

Once Marshall reviews the plan, it moves on to the City Planning Commission and the City Council as part of the city’s land use procedure.

This marks the fourth rezoning effort in Forest Hills and Rego Park since 2002. In October, the community board threw its support behind the creation of a special district limiting building heights within ten blocks of Austin Street bounded by Queens Boulevard, the Long Island Railroad tracks, Ascan Avenue and Yellowstone Boulevard. The plan would also allow for residential uses along the popular shopping strip.

Under that plan, which will likely be voted on by the City Council later this month, building heights on the south side of Austin Street would be limited to about 40 feet, while buildings on the north side would be limited to 70 feet. Currently, there is no height restriction along Austin Street, and since the area is primarily zoned for automotive uses, some developers have sought variances that could allow them to build 20-story towers.

As a result of public input, one change has been made to the proposal since it was presented to the board: buildings along eight blocks on the south side of Queens Boulevard would be limited to 125 feet, instead of 150 feet as originally proposed, according to Young. “There were concerns at 150 feet because people felt they would get a lot of buildings that are too tall,” he said.
Posted by The Forum Newsgroup at 3:30 PM